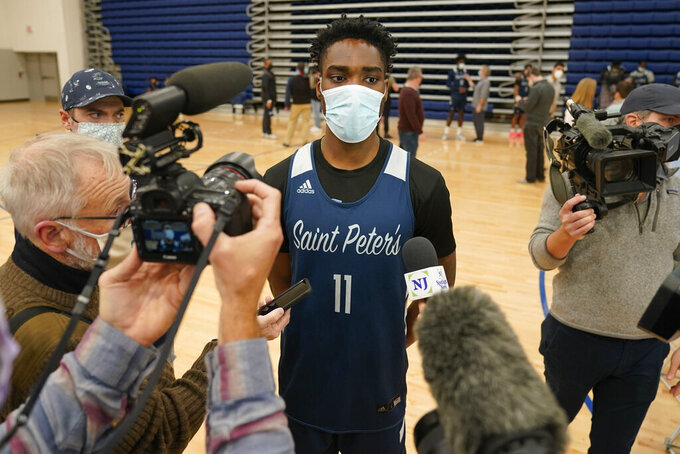 JERSEY CITY, N.J. (AP) — One of the biggest changes in college sports in recent years has been the transfer portal.

It has allowed players to move from one program to another without sitting out a year, and given some schools a player or two to allow them to compete for a national title.

Saint Peter's, the surprise story of this year's NCAA Tournament, is in the Sweet 16 this week against No. 3 seed Purdue in Philadelphia because the portal came up short for Peacocks' forward and defensive star KC Ndefo.

Ndefo put his name in the portal after last season and did his due diligence to find a new program. He listened to other players. Visited Texas Tech. Did Zooms with other schools and thought a lot.

Two days before the start of the school year, the resident of Elmont, New York — famous as the home of Belmont Racetrack — decided to return to tiny Saint Peter's in Jersey City, New Jersey.

“I don’t think he was coming back,” Saint Peter's coach Shaheen Holloway said Tuesday. “You know, we prepared for him not to come back. I brought a couple of freshman big guys. I was getting those guys ready the whole summer when he came back two days before school started. We had to adjust everything we did for three months.”

Ndefo said his summer was comprised of a lot of high and lows, with other coaches and players wooing him.

“In the end, I knew what was best for me and who had my best at heart,” Ndefo said. “So, you know, coming back to this program was definitely something I definitely wanted to do.”

Ndefo had to wait a month to return. The 6-foot-7 forward was not vaccinated and he had to sit out while getting his shots and waiting to be given the OK to play.

“That’s why we kind of started slow, because I was not anticipating him coming back,” said Holloway, who had build his team its defense with Ndefo being the lynchpin. The senior has been the Metro Atlantic Athletic Conference's defensive player of the year for the past three seasons.

Matthew Lee, the son of former Marquette great Butch Lee, said having Ndefo in the middle helps the guards.

“It helps us tremendously,” Lee said. “For the guards, it allows us to put pressure on the perimeter knowing we have KC as a backbone. It's amazing to have that.”

Saint Peter's didn't find its stride until late in the season, winning its final nine games, including the MAAC Tournament. Seeded No. 7 in the East, the Peacocks stunned the college world with wins over No. 2 seed Kentucky and No. 7 Murray State.

Purdue (29-7) will present big problems for Ndefo and twin brothers Hassan and Fousseyni Drame. The Boilermakers are massive in the middle with 7-4 Zach Edey and 6-10 Trevion Williams.

Ndefo had faced players that tall, including some in AAU events. He's not worried. He would be, if he had left Saint Peter's and missed this show.

“Honestly, it’s crazy, you know, God is good,” said Ndefo, who was born in Nigeria and came to the United States as an infant with his family. “God puts opportunities out for people and, you know, I just try to stay the course and be grateful for what is going on because anything could have happened.”