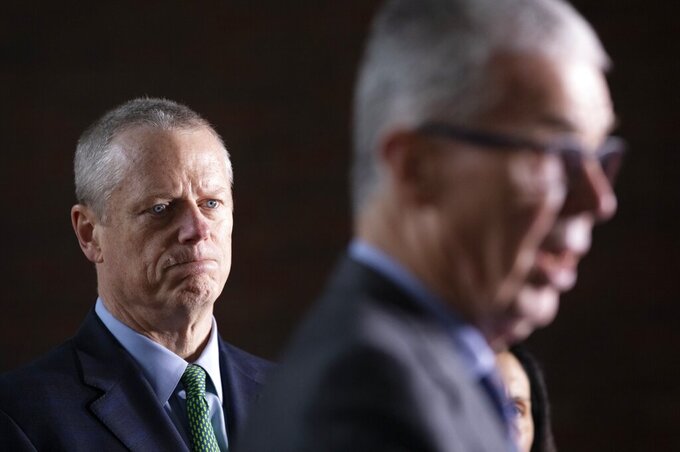 Massachusetts Gov. Charlie Baker, left, listens as CEO of the Boston Athletic Association Thomas Grilk talks about the postponement of the Boston Marathon during a news conference, Friday, March, 13, 2020, in Boston. The Marathon, which was due to be run on April 20 will be run on Monday, Sept. 14, 2020, due to concerns about the coronavirus. For most people, the new coronavirus causes only mild or moderate symptoms, such as fever and cough. For some, especially older adults and people with existing health problems, it can cause more severe illness, including pneumonia. The vast majority of people recover from the new virus. (AP Photo/Michael Dwyer)

BOSTON (AP) — The Boston Marathon on Friday was postponed for five months due to the coronavirus pandemic, sacrificing the customary Patriots Day start in the hopes of preserving the uninterrupted 124-year tradition of the world's most prestigious long-distance run.

In delaying the marathon from April 20 to Sept. 14, the city avoids for now an event that draws more than 30,000 runners from around the world, packs them in buses and starting corrals and then sends them off on a 26.2-mile (42.2-kilometer) trek from Hopkinton to Boston's Back Bay. An estimated 1 million people line the course as it winds through eight cities and towns, high-fiving, hugging and even kissing the runners along the way.

The Boston Marathon has never been canceled since the first edition in 1897, when 15 men drew a starting line in the dirt in Ashland and headed for the city to commemorate the first modern Olympic Games the previous year. In 1918, the format was modified to a relay race due to World War I; the 2013 race was stopped when two bombs exploded at the finish line, several hours after the winners had finished but while many runners were still on the course.

“We’ve shown before that whatever the challenge to our marathon and to our city, we are Boston Strong," Mayor Marty Walsh said at a news conference on Friday, when the city's signature event joined virtually every college or professional league worldwide in canceling or postponing competition. “The marathon is Boston. It connects us. It reflects us. It brings out our community spirit and our resiliency."

The Boston Athletic Association had been silent on the fate of the race even as other high-profile sports events were scuttled. The Masters was postponed indefinitely on Friday; previously the NBA and NHL suspended their seasons, Major League Baseball halted spring training and put off opening day, and all NCAA championships were canceled, including the March Madness basketball tournament that is one of the highlights of the sports calendar.

“The B.A.A. understands the city’s decision that the Boston Marathon cannot be held on April 20, 2020,” race organizers said in a statement. “We offer our full support to take all reasonable efforts to postpone.”

It is the first time that the race won't be held in April. For the first 49 years, the marathon was held on April 19, the anniversary of the first Revolutionary War battles in Lexington and Concord, or on the 20th if Patriots Day fell on a Sunday.

The state holiday was changed to the third Monday in April in 1969. The race has been on that day ever since — traditionally with the Red Sox playing in the morning so the baseball fans can wander over to Kenmore Square after the game to see the runners pass by with one mile to go.

“It won’t look right on the calendar,” Gov. Charlie Baker said. “But it’s the right thing to do.”

The new date moves the race from the spring season to a crowded fall, with the London, Paris and Barcelona marathons also postponing until after the summer over COVID-19 concerns; Rome's race was canceled. And it would come about one month after the world's top runners are expected to — but with diminishing certainty — line up for the Olympic marathon in Japan. (Because of the distance's physical toll, most elite marathoners run no more than two races per year.)

But Walsh said postponing the race was preferable to canceling, citing a estimated $211 million pumped into the city's economy each year. The B.A.A. and marathon runners also raise about $40 million for charity.

The mayor said there was no thought of excluding the tens of thousands of amateur runners who consider running Boston a bucket list achievement. The Tokyo Marathon went on as scheduled earlier this month with just over 200 elite runners but not the 38,000 recreational runners who had signed up; spectators at the Los Angeles Marathon were advised to practice social distancing.

For most people, the new coronavirus causes only mild or moderate symptoms, such as fever and cough. For some, especially older adults and people with existing health problems, it can cause more severe illness, including pneumonia, and death.

The vast majority of people recover from the new virus. According to the World Health Organization, people with mild illness recover in about two weeks, while those with more severe illness may take three to six weeks to recover.

Race organizers had said they worked with the WHO and the federal Centers for Disease Control and Prevention, as well as state officials. Baker has already declared a state of emergency.

Walsh discouraged runners — known as bandits — from taking to the course anyway on Patriots Day. The B.A.A. said its 10,000-runner 5K on marathon weekend will also be rescheduled.

“The B.A.A.’s mission of promoting health through sports, especially running, has guided our organization for more than a century," CEO Tom Grilk said. “We look forward to welcoming the world to Boston in September in celebration of the 124th Boston Marathon.”

Philip Marcelo and Mark Pratt in Boston contributed to this story. The Associated Press receives support for health and science coverage from the Howard Hughes Medical Institute’s Department of Science Education. The AP is solely responsible for all content.