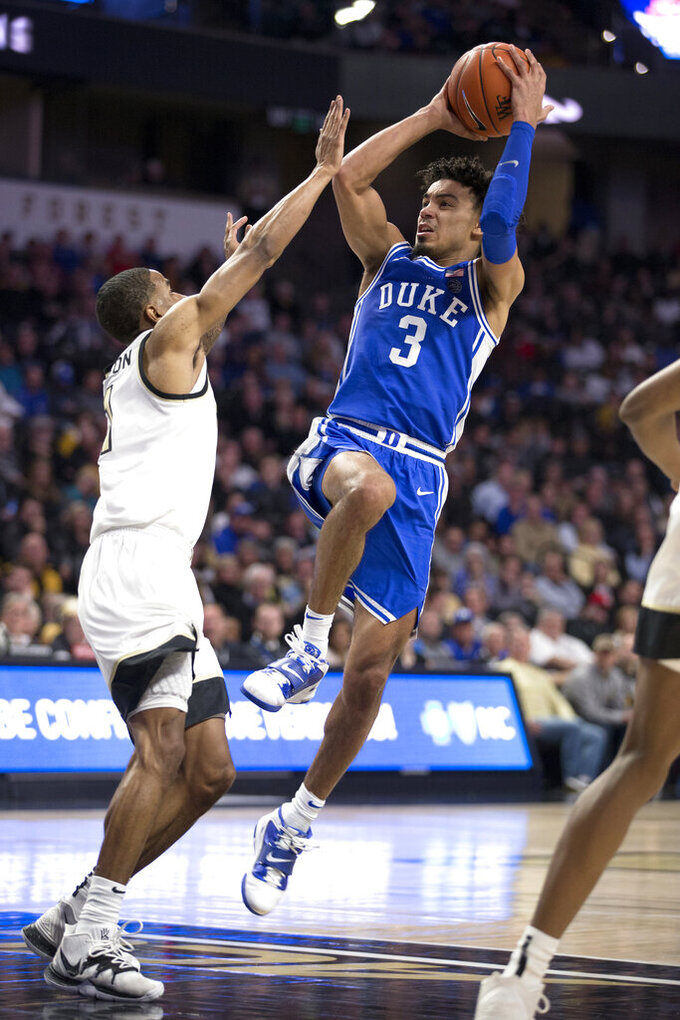 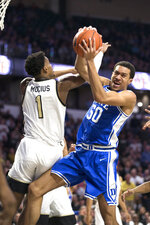 WINSTON-SALEM, N.C. (AP) — Brandon Childress never panicked as shot after shot clanged off the rim. Nor did Wake Forest when it fell behind late in regulation against seventh-ranked Duke.

It turned out Childress and the Demon Deacons had a few big shots left in them — enough to end a long losing streak to the Blue Devils in memorable fashion with a court-storming celebration.

Childress ended an awful shooting start with a game-tying 3-pointer near the end of regulation and scored 13 of his 17 in two overtimes to help the Demon Deacons stun the Blue Devils 113-101 Tuesday night. It was Wake Forest's first win against the Blue Devils in nearly six years, ending a run of 11 straight losses that had lasted through coach Danny Manning's tenure.

Childress missed his first 10 shots before hitting the tying 3 with 15.5 seconds left in regulation. And once the game went into a second extra period, Childress buried another on the first possession to put the Demon Deacons (12-15, 5-12 Atlantic Coast Conference) ahead to stay.

“I don't care about percentages,” Childress said of his 0-for-10 start. “I'm satisfied with the shots I take. I practice those. It might not have went as much as I'd like to. But I just wanted to find the right moment to take over the game, and I did that.”

He sure did. Childress made six of his last 10 shots, leading an inspired performance from a team that entered this one near the bottom of the ACC standings.

Sarr finished with a career-high 25 points for Wake Forest, while Isaiah Mucius came up with a dunk with 14.7 seconds left to finally punctuate a huge victory that included the Demon Deacons rallying from nine down in the final 90 seconds of regulation.

When it was over, Wake Forest fans stormed the court to celebrate their first win against Duke since March 2014. Childress got carried around the court on shoulders and fought back tears through a postgame interview.

“I was ready when my number was called," the senior said. “I was 0 for 10 at first, but I stayed with it and I hit shots when it mattered and we won the game.”

It marked the second time in a week the Blue Devils (23-5, 13-4) lost on the road to an unranked, instate opponent. They lost by 22 points at North Carolina State last week, a game that ended with another court-storming celebration.

Coach Mike Krzyzewski was frustrated by his team's lack of competitive edge in that one, saying the Blue Devils were “never there” in the loss in Raleigh. He wasn't particularly pleased with the way his team handled this one, either.

Namely, there were the late turnovers after taking a 78-69 lead with 1:21 left in regulation that opened the door — just enough for Childress and the Demon Deacons to jump through.

“I’m disappointed in our group,” Krzyzewski said. “I didn’t think we came the way we should and the way we’ve practiced. We show our youth so much. ... This is our 28th game. You’d hope that we’d be older by now, but we were not tonight.”

Freshman Wendell Moore Jr. had a season-high 25 points to lead the Blue Devils, and Tre Jones added 24 points, seven rebounds and nine assists at the point.

Duke: It’s a costly loss for the Blue Devils, who fell a game behind league-leading and sixth-ranked Florida State in the ACC standings with three games to play.

“We didn’t make the right plays really at the end,” said Jones, “and we let them back into it."

Wake Forest: The Demon Deacons had lost four of five coming in, sitting a game ahead of last-place North Carolina in the ACC. Now they have their first wins against both Duke and UNC under their sixth-year coach, both coming in the past month, with Krzyzewski saying Wake Forest was “the team that was deserving of winning.”

“I thought that was an unbelievable college basketball game,” Manning said.

That included playing a steady final six minutes of a first half that saw Duke trail by 12 but rally to tie it at 39 on Jones' 3-pointer at the horn.

“Really Justin Robinson saved us or else we should’ve been down about 10 or 15 points," Krzyzewski said.

Wake Forest shot 52% for the game and helped itself by getting to the line repeatedly. The Demon Deacons made 37 of 50 free throws, including 13 of 15 in the overtimes.

Duke: The Blue Devils visit reigning national champion Virginia, which has won four straight and seven of eight, on Saturday.