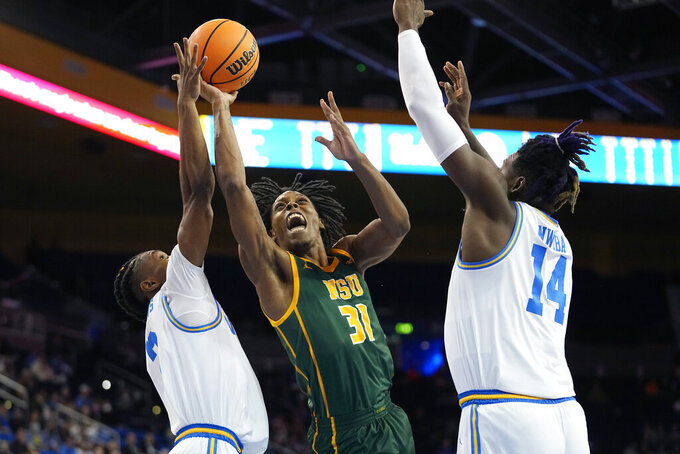 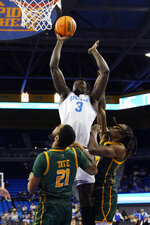 LOS ANGELES (AP) — Jaylen Clark had 19 points and nine rebounds as eighth-ranked UCLA rolled to an 86-56 victory over Norfolk State on Monday night.

The Bruins (3-0) had six players score in double figures — including all five starters — and shot 57.1% from the field as they led throughout.

“I wasn’t happy with our passing and shot selection in that game. We should be a team that shoots a high percentage all the time with our talent level,” Cronin said. “Our passing was much better tonight and we got the ball inside. We wore them down as the game went along.”

Kris Bankston scored 17 points and Gilbert Brown added 13 for Norfolk State, which lost to a top-10 team for the second straight game. The Spartans (2-2) fell 87-70 at No. 5 Baylor last Friday in a rematch of an NCAA Tournament matchup last March.

Clark made five 3-pointers as the Bruins went 11 of 25 from behind the arc.

“I feel like half of it is confidence, but the real answer is just work," said Clark, who is averaging 17.3 points through three games. "I’m shooting every day, getting up 700 shots on the gun. Just seeing the ball go through the hoop over time gives me confidence. It also helps when I’m playing with people like Jaime (Jaquez Jr.) and Tyger (Campbell) who get double-teamed consistently, because I’m getting free looks off.”

The Bruins had a 46-33 halftime lead before breaking it wide open with a 23-4 run in the second half. Clark had six points on a pair of 3-pointers, while Bona added five and Bailey and Jaquez scored four apiece.

UCLA's largest lead was 34 with less than six minutes remaining.

“We stunk. We just didn’t have it today,” Norfolk State coach Robert Jones said. “I think that some players in the locker room rested a little bit on our laurels that we played well against Baylor, because that really wasn’t a 17-point game. They thought it was gonna be easier, instead of realizing that UCLA was on full alert because of how we played.”

Norfolk State: Joe Bryant Jr., who came into the game averaging 17.3 points, was held to four on 2-of-8 shooting from the floor. It was the lowest-scoring game for the fifth-year guard and 2022 MEAC Men’s Player of the Year since he had three points in a loss to Gonzaga in the 2021 NCAA Tournament.

UCLA: The Bruins have won their three games by an average of 23.3 points and have trailed for only 5:55.

UCLA: Faces No. 19 Illinois in the Continental Tire Main Event in Las Vegas on Friday.