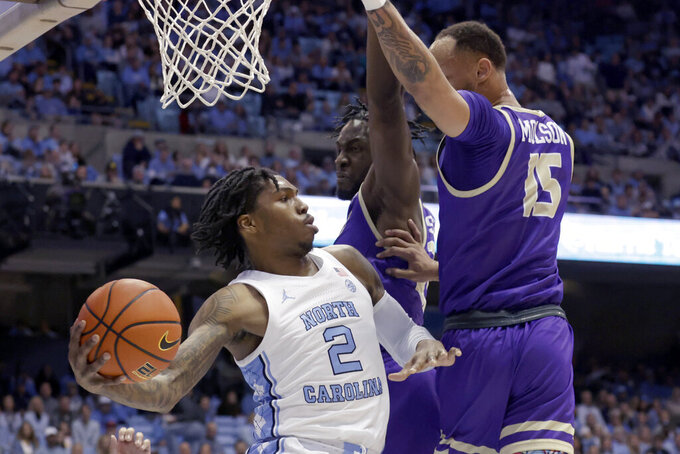 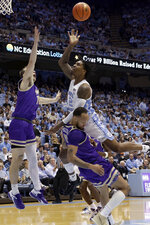 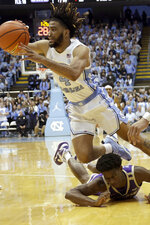 CHAPEL HILL, N.C. (AP) — Not being perfect was fine with No. 1 North Carolina.

What matters to the Tar Heels is getting better.

Pete Nance added 11 points and Leaky Black had 12 rebounds for the Tar Heels (4-0), who got off a slow second half while concluding a four-game homestand.

“It’s not about one person, it’s about all of us,” Davis said.

The Dukes, who averaged 105.1 points in four romps, didn’t reach the 50-point mark until less than 7 1/2 minutes remained in the game.

“When you’re in a situation like this, you want to play better,” James Madison coach Mark Byington said. “We were not ourselves. Our whole team was out of rhythm.”

North Carolina’s lead was cut to 49-40 shortly after the Dukes put together a 12-2 run to begin the second half. At 57-49, Molson missed a jumper that could have made it tighter before the Tar Heels notched the next six points.

“We understand we had a good first half,” Davis said. “We still have to come out the second half."

James Madison had little flow early in the game, missing its first eight 2-point shots. Before a launch from inside the arc fell, the Dukes trailed 30-15 and more than 12 minutes had passed. They shot 29.4% overall in the first half.

Bacot, a senior, had a first-half double-double with 11 points and 11 rebounds.

“When I’m doing those types of things and get on the offensive glass, it helps me and the team,” he said.

“I just felt like we could do it better consistently,” he said. “I told the (assistant) coaches that I think we took a step forward.”

Since the last game, Davis asked his players to write out team goals. Before Saturday’s practice, they turned in a typed-up version signed by the players.

“It moved me,” the second-year coach said. “They took time to do this. … What blew me away, everybody signed it.”

He didn’t divulge the details of the list. But he has had it laminated and plans to put up a poster-sized copy in the locker room.

“This is their team,” Davis said. “I’m just in a position to manage it.”

James Madison: The Dukes didn’t handle the first half well in their first game against a Power Five conference team. They won their previous games by margins of at least 35 points. They relied heavily on perimeter offense, perhaps in part because some good looks from closer range didn’t fall in the opening half.

North Carolina: The Tar Heels appeared much more engaged in this game, and they certainly were more efficient. They attacked in the paint right away and that set a tone.

Puff Johnson, a junior swingman who was North Carolina’s first substitution less than four minutes into the game, made his season debut after sitting out with a sore knee. … This was the first meeting between the teams since the 1989 Maui Invitational, when North Carolina won 80-79 with the help of current Tar Heels coach Hubert Davis, who then was a sophomore. … North Carolina improved to 4-0 all-time in the series, with the other two meetings in NCAA Tournament play.

North Carolina: Thursday vs. Portland in the Phil Knight Invitational in Portland, Oregon.