Dawkins scores 23 points and UCF beats UConn on the road 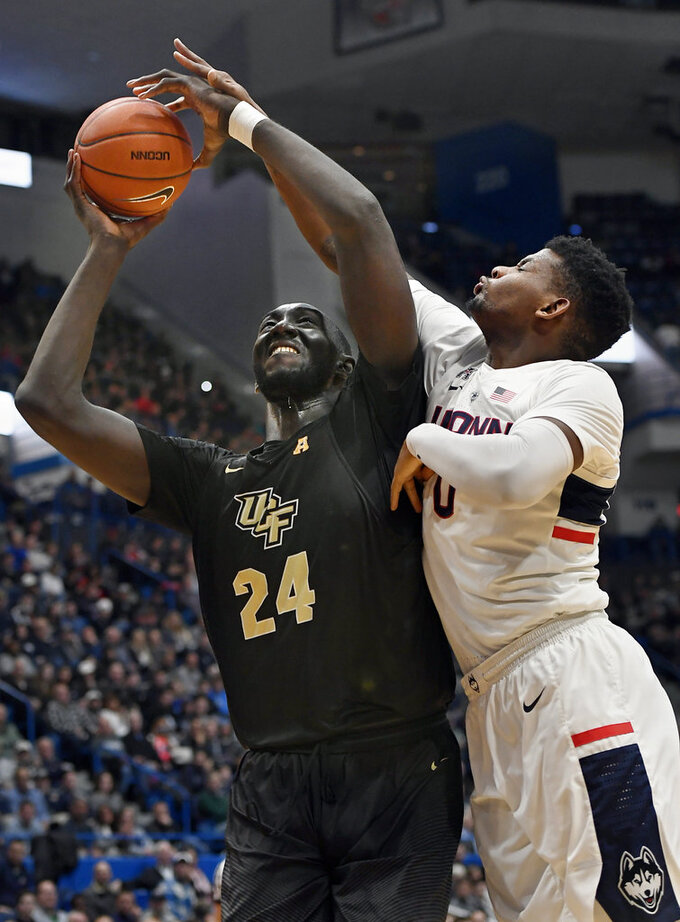 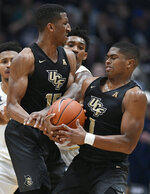 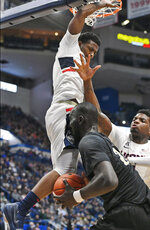 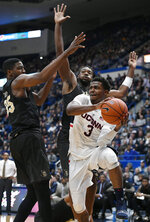 HARTFORD, Conn. (AP) — Aubrey Dawkins has waited for two years, through a transfer and a season-ending injury, for a chance to make an impact at UCF.

The coach's son scored a season-high 23 points on Saturday, including 16 in the second half, to lead the Knights to their sixth straight win, a 65-53 victory over UConn.

B.J. Taylor added 12 points for UCF (12-2, 2-0 American), which won on the Huskies home floor for the first time in program history.

"That means everything," said Dawkins, who is averaging just under 16 points a game this season. "It's a big win for our history and our program and bodes well for our future."

Alterique Gilbert had 18 points and Christian Vital 15 for UConn (9-6, 0-2), which lost its third straight game.

UCF led just 33-30 halftime, but quickly built that to eight in the second half on two jumpers by Dawkins, the first from beyond the arc after a steal by Tacko Fall.

UConn came back to tie the game at 40 on a 3-pointer from Vital, part of a personal 7-0 run. But UCF forced turnovers on the next five UConn possessions and took control over the final 15 minutes.

A 3-pointer from Taylor with five minutes left gave the Knights a 12-point lead and they kept the Huskies at arms-length the rest of the way.

"There is obviously a gap between us and the better teams that we play," said UConn coach Dan Hurley. "We've just kind of got to keep closing that gap with our efforts this year and building this thing up over time."

UCF: The Knights shot 57 percent from the floor, while holding UConn to just 32 percent shooting. Dawkins made nine of his 13 shots from the field and UCF was 20 of 29 from the free-throw line.

"We knew coming into tonight that a big part of the game would come down to our play on the perimeter," said Taylor. "Aubrey, he's athletic and he's such a good shooter on the move. When he gets it going like that, it's hard to defend him because he elevates so well and gets that thing off."

UConn: The Huskies were concerned about matching up with the taller Knights inside. But UConn outrebounded UCF 37-23, including 17-0 on the offensive glass. The Huskies failed to convert those boards into baskets, scoring just six second-chance points.

"Even when they got offensive rebounds, our guys were still in there scrapping and scrambling, still defending the next possession," said UCF coach Johnny Dawkins. "I think that was very helpful for us."

Dawkins played almost 38 minutes and has been averaging over 33 minutes per game this season. He sat out the 2016-17 season after transferring from Michigan and didn't play a game last year after suffering a shoulder injury in the preseason.

"This has been a long process for him," Johnny Dawkins said. "But the one thing about him is he never put his head down, he never complained about why him. He just kept working, kept working and I'm just happy to see him have this opportunity to get out here and compete."

UConn star Jalen Adams scored just eight points on 2 of 10 shooting. Tyler Polly, the Huskies 3-point specialist, missed all three of his shots from behind the arc. He is now 0-11 since going 3 for 3 from long range against Drexel on Dec. 18.

UCF: The Knights have more than a week off before hosting East Carolina on Jan. 13.

UConn: The Huskies head back to campus to face SMU on Thursday night.