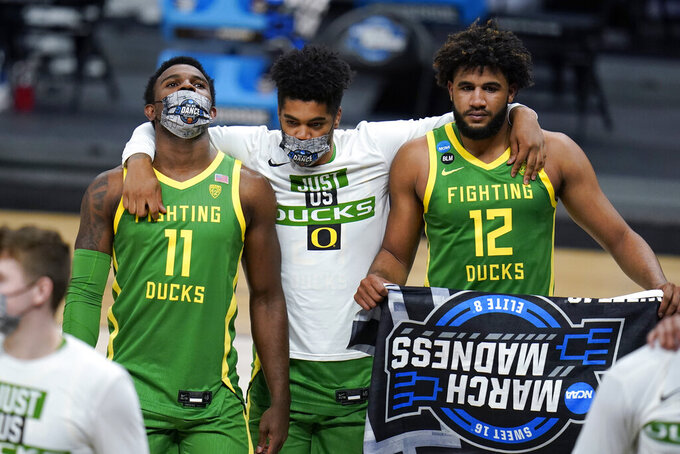 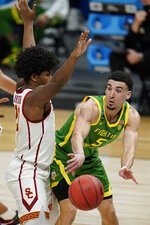 Dana Altman was quick to shoulder the blame. One of Oregon’s ugliest offensive performances of the season came at the wrong time and against an opponent the Ducks knew all too well.

For the second time this season, the Ducks lacked the answers to solve Southern California.

“First thing after the game I told the team, ‘When you lose, you lose together. I made a mistake on personnel and I didn’t have you ready for the zone,’" Altman said. "And you want your guys to look in the mirror and say when they don’t get something done.

"And as a coach, if you don’t set that example, it’s pretty hard for them to do it.”

Oregon’s season came to a crashing halt with an 82-68 loss to USC in the West Region semifinal Sunday night. The Ducks were undone by struggles at the offensive end as they were unable to solve the length and size presented by the Trojans' zone defense.

Since losing to USC in late February, the Ducks (21-7) had been rolling. Oregon had won seven of the previous eight games, the only loss coming to state rival Oregon State in the Pac-12 Tournament. During that eight-game stretch, the Ducks were averaging nearly 80 points per game and had just dropped a season-high 95 points on No. 2 seed Iowa in the round of 32.

But that offensive punch was absent against the Trojans. Oregon’s lowest offensive output of the season came in its 72-58 loss to USC on Feb. 22. And for much of the night, it appeared the Ducks might be on the verge of some more ugly offensive numbers.

“Their length really bothered us and got us off track,” said Oregon forward Eugene Omoruyi, who finished with a game-high 28 points. “And we just didn’t compete in the first half, which we should have come out more aggressive. But yeah, their length really affected us in our offense.”

Omoruyi and Chris Duarte carried the Ducks' offense. Duarte added 21 points and the top two scorers all season for the Ducks combined for 17 of Oregon’s 26 made shots.

What the Ducks lacked was the supporting cast, which had been so important to their success during the season. Oregon’s other three starters — LJ Figueroa, Will Richardson and Eric Williams Jr. — were a combined 5 of 27 shooting and had 11 total points. Figueroa and Richardson had a combined 40 points by themselves in the victory over Iowa.

“Eric took some tough shots that first half. LJ just never seem to get comfortable. Will had been scoring well,” Altman said. “The zone didn’t allow us to move the ball. Some of the shots early off the dribble I thought took some guys out of their rhythm.”

Despite the offensive issues, the Ducks had a chance late to put pressure on the Trojans. After trailing by 21 midway through the second half, the Ducks pulled within 69-60 with 3:52 left. But Tahj Eaddy answered with a 3-pointer for USC and ended Oregon’s comeback bid.

“We were going to compete to the end no matter what,” Omoruyi said. “We were just fighting and then I think they hit a 3 and it just got us back rocky again. But we wanted to fight no matter what the score was.”