Duggan exceling for No. 13 TCU after he lost starting QB job 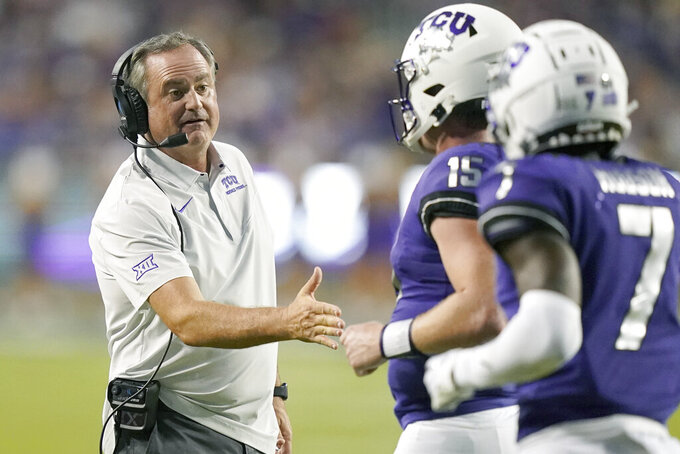 FILE - TCU coach Sonny Dykes, left, congratulates quarterback Max Duggan (15) after a touchdown during the first half of the team's NCAA college football game against Tarleton State in Fort Worth, Texas, Sept. 10, 2022. Dykes will be back in Dallas on Saturday, on the visiting sideline when TCU plays there for the first time since 2018. The game was sold out days in advance, a nod to the recent success in the series for SMU and the return of the former coach that home fans will certainly boo for leaving them at the end of last season. (AP Photo/LM Otero, File)

FORT WORTH, Texas (AP) — Max Duggan has certainly surprised new TCU coach Sonny Dykes, who has even gotten emotional talking about the fourth-year quarterback who went from losing his job to being one of nation's most efficient passers.

The coach's feelings aren't really about the impressive numbers Duggan is now putting up for the undefeated 13th-ranked Horned Frogs. They are for how he responded — or, more accurately, didn't respond — after the new coaching staff went into this season with a different starter than the guy who had been QB1 for TCU most of the past three seasons.

“Yes, he has surprised me, and not as a player, but I just think the entirety of kind of his experience” Dykes said this week. “There’s all this stuff that typically happens when a guy loses a job, and especially someone who’s played as much football as Max. Well, none of that happened.”

While Duggan was disappointed in himself when he didn't win the starting job through spring and preseason practice — redshirt freshman Chandler Morris started the opener before getting hurt — he was unlike so many other Power Five quarterbacks in that position. Duggan didn't jump into the transfer portal.

“Everybody wants to play, everybody wants to be the guy. But, you know, I got over it,” said Duggan, who is on track to graduate from TCU's business school in December. “I didn't feel sorry for myself, I didn't pout. I knew that wasn't going to help the team, so I didn't really worry too much about it.”

With the Frogs (5-0, 2-0 Big 12) preparing to host eighth-ranked Oklahoma State (5-0, 2-0) in a matchup Saturday of the league’s only undefeated teams, Duggan has completed 93 of 127 passes (career-best 73%) for 1,305 yards with a league-best 14 touchdowns and one interception. His 194.35 passing efficiency rating is second only to Ohio State’s C.J. Stroud, an early Heisman Trophy favorite.

Duggan trails only Cowboys senior Spencer Sanders in the Big 12 for total yards per game (327 to 301.8) and passing yards (278.8 to 261). Those numbers include Duggan's 68 total yards when he took over after Morris sprained his left knee late in the third quarter of the opener at Colorado. In his four starts, the TCU senior has averaged 360 total yards and 319.5 yards passing with all 17 of his TDs (14 passing, three rushing).

“Everybody feeds off his energy," senior receiver Taye Barber said.

While staying focused in the moment, a level-headed Duggan isn't ready yet to reflect on how his senior season has gone, or a career with 33 starts so far. The Iowa Gatorade player of the year and a four-star recruit before joining the Frogs, he became their starter the final 10 games as a true freshman in 2019.

"I just want to win. ... I want to see the guys have a good time, make sure we finish the season on top,” he said.

Dykes said Duggan just keeps getting better in practice and games, continually making throws the coach has never seen him make in the system that encourages smart and aggressive plays.

Still, that isn't what Dykes was talking about when he got emotional after the Frogs wrapped up non-conference play with a win at SMU, the team he coached the past four years. He expressed being as proud of Duggan as any player he has ever had.

“He loses his job, which is really hard. He’s getting ready to be a senior, it's his last year. Then he never blinks. He never had a bad practice, he never pouted, he never thought of himself one time,” Dykes said. “How many people can you say that about, that you know in your life? I mean truly, how many people can say that about? And you can say it about Max Duggan, that’s for sure. ... I’m incredibly indebted, incredibly proud.”

Dykes went to explain his reaction as being because Duggan acted “the way you would want your son to handle that situation."

TCU basketball coach Jamie Dixon, preparing his own team for what is expected to be a pretty good season, has also been impressed.

“I think the quarterback’s story is just unbelievable,” Dixon said. ”Guys transfer when they're second string, and this guy stayed. And to play this well, it's a great story of Max."