East Preview: Smart back in Texas without future questions 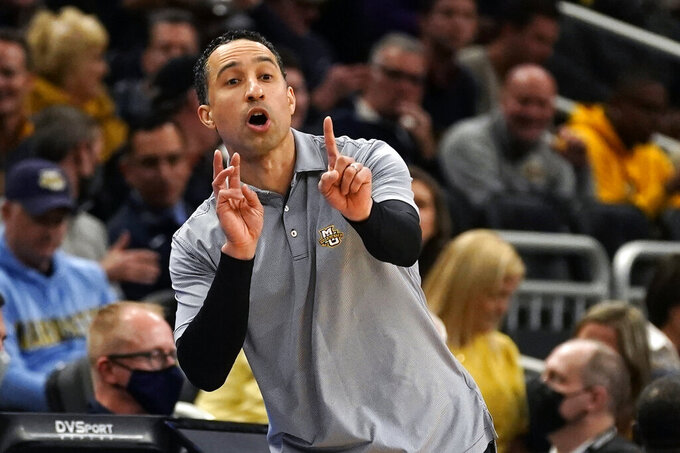 FILE -Marquette head coach Shaka Smart reacts during the first half of an NCAA college basketball game against UCLA Saturday, Dec. 11, 2021, in Milwaukee. First-year Marquette coach Shaka Smart is back in Texas, going into this NCAA Tournament without any underlying questions or pressure about his future. That is much different than last March, when Smart was still coaching the instate Longhorns. Only about a week after their third consecutive first-round NCAA loss, he left to take a new job in his home state of Wisconsin. (AP Photo/Morry Gash, File)

FORT WORTH, Texas (AP) — First-year Marquette coach Shaka Smart is back in Texas, going into this NCAA Tournament without any underlying questions or pressure about his future.

That is much different than last March, when Smart was still with the Longhorns. Only about a week after their third consecutive first-round NCAA loss, he left Texas to take a new job in his home state of Wisconsin and hasn't coached another game in the Lone Star State until now.

“I’m really grateful to be at Marquette. I’m grateful for all of the people that make our program what it is. Most importantly, our players,” Smart said Wednesday. “And I was also grateful to be at Texas. It was, you know, a phenomenal group of guys that I got to work with. But that’s in the past now.”

Marquette (19-12), the No. 9 seed in the East Regional, plays Thursday against No. 8 seed North Carolina (24-9) in Fort Worth. That is less than 100 miles from the Waco campus of top-seeded Baylor, and about 200 miles from the Austin campus where Smart coached six seasons without a win in the NCAA tourney.

Texas fans had grown increasingly frustrated with Smart, who arrived off an impressive run at VCU that included going from the NCAA First Four to the Final Four in 2011. The Longhorns won a Big 12 Tournament championship last March that restored some hope, but they then lost their NCAA opener as a No. 3 seed to Abilene Christian.

The Golden Eagles have only two players with NCAA tourney experience, and that came with other teams — graduate transfer guard Darryl Morsell for Maryland in 2019 and 2021, and forward Kur Kuatha with Oklahoma last season

North Carolina also has a first-year head coach in Hubert Davis, though he was a nine-year assistant for Roy Williams, whose final game was an 85-62 loss to Wisconsin that was the only time in his 30 NCAA appearances his team didn't get past the opening round.

“That left a bad taste in all of our mouths. And it’s something that coach Davis emphasized earlier on in the week, and just telling us that it won’t go down like that,” junior post Armando Bacot said. “All of us, we packed four or five outfits. So we don’t plan on going home early.”

The Tar Heels won their sixth national championship in 2017, their fifth since losing the 1977 title game to Marquette, which got its only championship in coach Al McGuire's final game with a win over North Carolina.

No surprise that MEAC champion Norfolk State is one of the biggest underdogs heading into the NCAA Tournament. The Spartans have overcome long odds before.

Baylor is a 20 1/2-point favorite against the 16th-seeded team, according to FanDuel Sportsbook. The Spartans were 21 1/2-point underdogs going into the 2012 NCAA opener as a No. 15 seed, when they pulled off an 86-84 shocker over second-seeded Missouri.

The Spartans' only other NCAA appearance was last season, when they won a First Four game over Appalachian State before losing to eventual national runner-up Gonzaga.

“I always tell the guys about when we beat Missouri in front of 18,000 fans, just yelling and cheering your name. And then last year, we get to the bubble, and then there’s 500 people the first game, and then 5,000 people the second game,” said coach Robert Jones, an assistant for that 2012 upset. “So they’re looking at me, like, this is the NCAA Tournament? This is what it’s supposed to be like? But now tomorrow, they’ll see the full tilt of the NCAA Tournament.”

Seventh-seeded Murray State has the nation's second-longest winning streak at 20 in a row, but the Racers will play for the first time in 12 days when they face San Francisco in Thursday's nightcap in Indianapolis.

While the extended break has sparked questions about possible rust, guard Tevin Brown coach Matt McMahon hasn’t eased up on the routine for the Racers (30-2) going into the game against the Dons (24-9).

“He’s always on go, no matter whether it’s the day before the game or two weeks before,” Brown said. “For us it was the matter of who we’re playing and when and where we were going to be playing at. That was the only thing we were concerned about, but as far as us staying sharp, we weren’t really worried about that.”

Second-seeded Kentucky faces 15th-seeded St. Peter's, aiming to regroup from a loss Tennessee in the Southeastern Conference Tournament semifinals that coach John Calipari called “a godsend.” The Wildcats had everybody healthy, but had to scrap through both games. They shot only 34% against the Volunteers.

Calipari used the extra time to put his Wildcats (26-7) through a physical scrimmage before they headed to Indianapolis.

“We needed to get back to free and loose, and open and playing off of one another, the roles of what we needed to do,” he said. "My feeling was, and my thought at the time, we can’t do it in the NCAA Tournament. We’re just dragging game to game, which we had been doing. I felt we needed to go and let’s do this and, you know, (make) a tweak here and there.”

Baylor big man Flo Thamba saw his sister for the first time in 10 years when she came from England for his senior day when the Bears played their final home game March 5 against Iowa State.

On Thursday, his parents will seem him play a college game in person for the first time.

Thamba, who has a 7-foot-5 wingspan, is originally from the Democratic Republic of the Congo, grew up in South Africa and also lived in England and France before coming to the United States. He said there's a lot emotions knowing his parents will be in the stands, and that can see him on a big stage.

”I kind of picked up the basketball at 11, played a little bit. Started playing competitive basketball probably around, 14, 15. I mean, for my parents, my family, basketball was just something I did for fun," he said. "They never really, like, knew the whole seriousness of it until I came to the States. And I was, like, I’m going to college. They were, like, okay, have fun, play basketball in college."

AP Sports Writer Gary B. Graves contributed to this report.