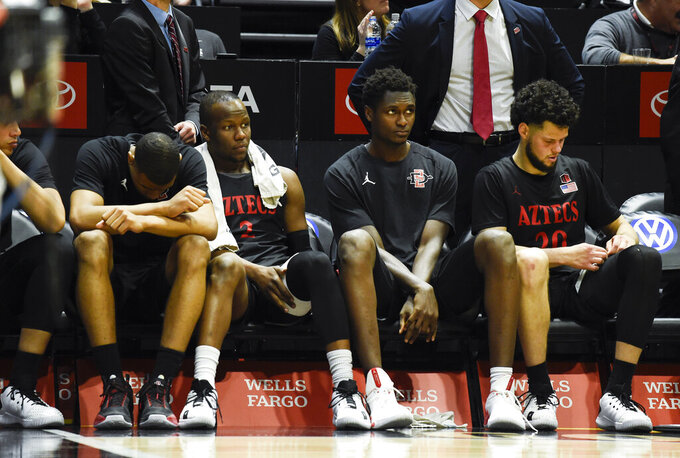 San Diego State players sit on the bench during the second half of an NCAA college basketball game against UNLV, Saturday, Feb. 22, 2020, in San Diego. UNLV won 66-63. (AP Photo/Denis Poroy)

SAN DIEGO (AP) — The first loss of the season isn’t sitting well with the San Diego State Aztecs, other than maybe the timing.

The loss snapped a school-record 26-game winning streak for the Aztecs, who had been the nation's last unbeaten team.

“Whether it was a year ago, when we had six, seven, eight losses, I don't like losing,” coach Brian Dutcher said Monday, when the Aztecs dropped only one spot in The Associated Press Top 25, to No. 5. “Because we were 26-0, that loss was no different than any I've ever encountered. I don't like losing.

“I watched the tape and tried to figure out what I could have done better and what I can get the team to do better so it doesn't happen again,” the coach said. “But it's college basketball and it happens every night. We've been blessed it hasn't happened to us very often. But it's a challenge to win college basketball games."

Not long after the loss, social media was flooded with the sentiment that maybe the loss would be good for the Aztecs, who have been projected as the No. 1 seed in the East, where the regionals will be played at New York's Madison Square Garden. Many fans are hoping SDSU will end up as the No. 2 seed in the West, where the regionals will be at Staples Center up the freeway in Los Angeles.

Not so fast, said Dutcher, who repeated his refrain: "I don't like losing at anything. If we lose a drill at practice, I'm not very happy. We have to be wired to win. It's the first goal we set all year and haven't achieved.”

After eclipsing the previous longest winning streak in school history — 20 games — and then clinching the MWC title with four games to go, Dutcher set a goal of a perfect regular season.

“So we won at Boise and this was the second of three remaining games and we didn’t win it. So that doesn't feel very good. Whether it will do us good or not remains to be seen. Every team is different. Some teams can't handle winning, some teams can't handle losing. We'll see what this team does because it's the first time they tasted defeat."

“I think we just figured out that we can be beaten,” Feagin said. “You learn from the mistakes we had in that game and you move on. I’m just glad it happened Saturday rather than the first game in March or the first game in the conference tournament or things like that.

“I don’t want to lose ever, but if I had to choose a time to lose, Saturday would have been the perfect time.”

SDSU held UNLV without a field goal for 11 minutes in the second half, but made too many mistakes on offense to fully overcome a 14-point deficit.

“Our defense was really good the entire second half,” Dutcher said. “We played at a really high level, but yet we didn’t take advantage of that with offense. So if this was football, we'd be mad at the offensive coordinator. But unfortunately they play both ways here so the same guys who were struggling on offense were playing their butts off on defense.”

While the aura of invincibility is gone, “I think this team has tremendous swagger. They know they're good,” Dutcher said. “They got beat and I’m sure they feel in their own minds they got beat because they didn’t play well. I’m sure they give UNLV some credit, but not as much as they say, ‘I have to play better.’ And so I like that about them.”