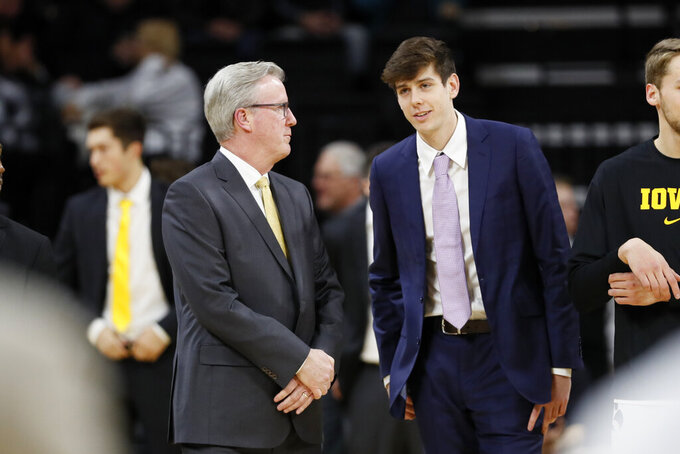 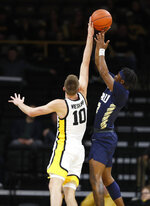 IOWA CITY, Iowa (AP) — Luka Garza has played against double-teams throughout his basketball career, so what he has seen in the first three games this season is nothing new.

It wasn’t a problem for Garza on Friday night, when the Iowa junior center scored a career-high 30 points and added 10 rebounds as the Hawkeyes defeated Oral Roberts, 87-74.

Jack Nunge broke out of his scoring drought to start the season with a 14-point, 10-rebound game, the first double-double of his career.

Garza, whose previous career high was 25 points on three different occasions, had 18 points in the first half as the Hawkeyes (2-1) built a 55-40 halftime lead.

Oral Roberts’ four tallest players are all 6-foot-8, so the 6-11 Garza knew he had a height advantage.

“I think tonight we knew we had to get the ball inside,” Garza said. “We knew they would double, so I knew I had to get deep post positions. That was just really my focus, to try to avoid the double-team as much as I could so I could get into my move without having to worry about it.”

“He is one of those guys who has been getting doubled his whole life,” Iowa coach Fran McCaffery said. “He is so crafty and quick with those moves, a lot of times he can get there before the double-team does.”

Nunge, who took a redshirt season last year, has started every game this season, but had just two points in the Hawkeyes’ first two games and had missed all five of his field-goal attempts. He started this game by missing a layup on Iowa’s opening possession, then responded by hitting four of his next six shots.

“Coach has been on me the last couple of days of practice to keep shooting, looking for my shot more,” Nunge said. “I tried to do that tonight.”

“He has a beautiful stroke, we want him to keep shooting the ball and being aggressive like that,” McCaffery said.

Iowa led by as much as 21 points in the second half before Oral Roberts (1-3) rallied to get to within 82-74 with 1:34 to play. But a layup by Joe Wieskamp and a 3-pointer by Jordan Bohannon provided the final margin.

Wieskamp and Bohannon each had 11 points and Connor McCaffery added 10 points and seven assists.

Max Abmas had 25 points, 16 in the second half, to lead Oral Roberts.

Iowa: The Hawkeyes bounced back from Monday’s 93-78 loss to DePaul. They have games with North Florida and Cal Poly in the next week to get ready for a stretch that includes games against Texas Tech and either Creighton or San Diego State in Las Vegas, a game at Syracuse in the ACC/Big Ten Challenge, a road game against Michigan and a home game against Minnesota to open the Big Ten season, a road game against Iowa State and a neutral-court game against Cincinnati in Chicago.

Oral Roberts: The Golden Eagles have already faced Oklahoma State and Tulsa this season on the road, losing by a combined 12 points. Their road nonconference schedule also includes trips to Wichita State, Creighton and BYU.

Iowa freshman forward Patrick McCaffery, Fran McCaffery’s son, did not play because of what his father called “residual health issues” related to the thyroid cancer Patrick was diagnosed with when he was 13 years old.

“Nothing life-threatening, cancer’s not back, anything like that,” Fran McCaffery said, not going into specifics. “But there are a lot of changes in his body that we are working through. We will take it day-to-day.”

Oral Roberts guard R.J. Fuqua was called for a flagrant-2 foul in the second half and was ejected from the game.

The Hawkeyes get a home game against North Florida on Thursday.