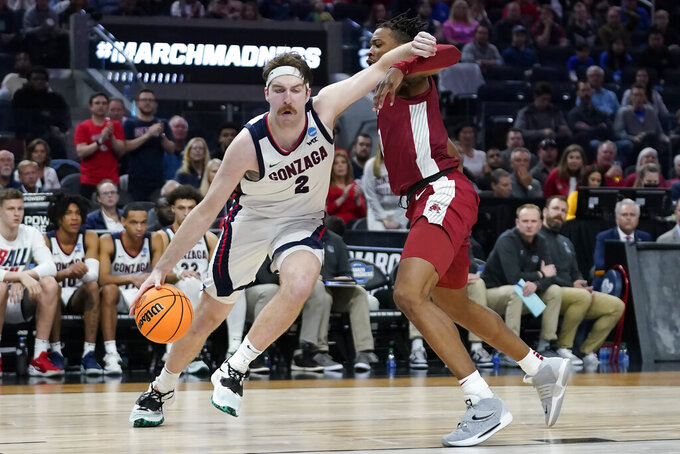 Gonzaga forward Drew Timme, left, drives to the basket against Arkansas guard Stanley Umude during the second half of a college basketball game in the Sweet 16 round of the NCAA tournament in San Francisco, Thursday, March 24, 2022. (AP Photo/Marcio Jose Sanchez)

SPOKANE, Wash. (AP) — Gonzaga junior forward Drew Timme announced his intention to declare for the NBA draft Thursday, but did not indicate if he would hire an agent.

Timme was the West Coast Conference player of the year this past season for the Bulldogs and a second-team AP All-America selection after averaging 18.4 points and 6.8 rebounds.

“The dream has always been to play professionally. After lots of thought and discussion, I will be putting my name in the NBA draft,” Timme wrote in his announcement on social media.

The question at the next level will be Timme’s role. At 6-foot-10, Timme has primarily played on the interior in his three seasons with the Bulldogs and attempted just 52 3-pointers in his college career.

Timme started to emerge as a potential force late in his freshman season, but broke out during the 2020-21 season when Gonzaga reached the national championship game before losing to Baylor. Timme averaged 19 points and seven rebounds during his sophomore season.

Timme is likely to be one of several departures for the Bulldogs after being knocked out in the round of 16 in the NCAAs. Freshman Chet Holmgren is a likely top five pick in the NBA draft and expected to declare. Gonzaga is also expected to lose guards Andrew Nembhard and Rasir Bolton.