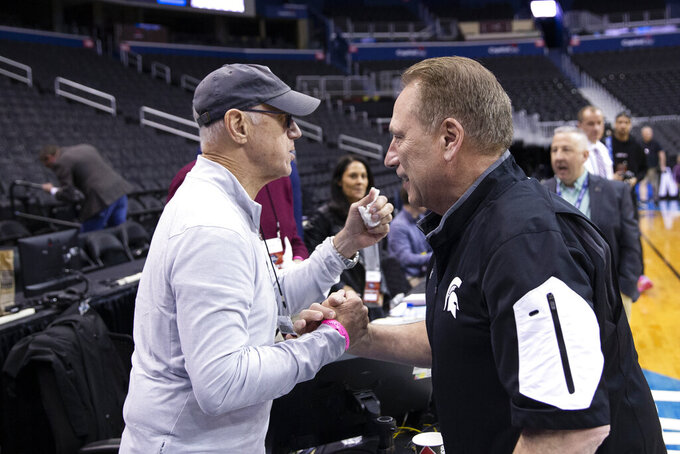 FILE - CBS director Bob Fishman, left, greets Michigan State coach Tom Izzo during practice at the NCAA men's college basketball tournament in Washington on March 28, 2019. Fishman, who has directed the NCAA Tournament since it was acquired by CBS, will direct his last Final Four for CBS and Turner this weekend. The fact that the tournament is in New Orleans is fitting since that is where Fishman's first Final Four took place.(AP Photo/Alex Brandon, File)

Duke's Mike Krzyzewski isn't the only one retiring after the Final Four.

It's also the last games for Bob Fishman, who is in the director's chair for the 39th time for CBS and Turner's coverage of the NCAA Tournament.

“We have become dear friends over these years. I’ve directed every single one of his national championships,” Fishman said. “I said to him a couple weeks ago ‘You know, I’m impartial coach, but it sure would be cool to be there together to celebrate our retirements together and maybe win a national championship.’ That would really top it off pretty well for me.”

Fishman will direct the TBS coverage of Saturday's national semifinals and Monday night's title game. Fishman, along with the top team of Jim Nantz, Bill Raftery, Grant Hill and Tracy Wolfson, have done all of Duke's games so far.

Not many people might know who Fishman is, but he has directed some of the most memorable events on CBS since moving from the news division in 1975. He directed the original “NFL Today” studio show along with figure skating at three Olympic Games, including the memorable showdown between Nancy Kerrigan and Tonya Harding in Lillehammer in 1994, and the 1992-93 World Series, which is remembered for Joe Carter's game-winning home run in 1993 to give the Toronto Blue Jays their second title.

“It’s more than just being perfect, technically perfect. It’s also the sixth sense that he’s had, where he needs to be and where to cut to, to tell the story. After all, it’s a visual medium,” said Nantz, who will call his 31st Final Four this weekend. “He’s the guy that has provided images that will outlive us all.”

Fishman, who has won 16 Emmy Awards, has also directed 27 U.S. Open tennis championships and 20 Daytona 500s, including the first time it was aired live in 1979 and featured the memorable post-race fight between Cale Yarborough and Donnie Allison.

“I've said it many times. If there’s a Mount Rushmore in sports production, Bob Fishman is front and center,” CBS Sports chairman Sean McManus said. “It's hard to imagine anyone is going to have as varied career in directing as he had. It's just remarkable.”

But of all the events he has done over the years, his favorite remains the NCAA Tournament.

Fishman's first memorable tournament shot came in 1982, when North Carolina's Michael Jordan hit the game-winning shot against Georgetown. Seconds later, Fred Bown had the infamous turnover where he threw the ball to James Worthy, whom he mistook for teammate Eric Smith.

Two years later, Fishman caught the scene on the Georgetown bench of coach John Thompson giving a giant hug to Brown late in the championship game against Houston.

One of the more notable Fishman celebration shots came in 1983 with North Carolina State coach Jim Valvano running around looking for someone to hug after the Wolfpack upset Houston. That was a camera in the high left corner of the arena that was supposed to focus on the larger celebration. It ended up being the only camera that found Valvano amid the last-second craziness.

Fishman has also been there for Kris Jenkins' 2016 buzzer-beater to lift Villanova over North Carolina, and Kansas beating Memphis in overtime in the 2008 final.

Of Duke's 13 Final Four trips under Krzyzewski, Fishman has done 12 of them. The only one he missed was in 1990, when he was being treated for bone cancer.

When CBS televised its first NCAA Tournament in 1982, less than half the games were on network television. CBS took over covering the entire tournament in 1991, but viewers were at the mercy of the network as to which games they could watch. It wasn’t until CBS joined forces with Turner in 2011 that all the games became available, with four channels being used the first weekend.

When Fishman did his first Final Four in New Orleans in 1982, CBS had six cameras. He will have at least 22 this weekend at the Superdome, including the robotic SkyCam and RailCam.

“We now have all the toys that we need that enhance the broadcast. It’s kind of true when we get overloaded sometimes. But my focus has always been to stay with the game and not get caught up on all the equipment,” Fishman said. “Make the best decisions I can for the viewer with the camera shot and when it’s appropriate to take those what we call cutaway shots. Just not always staying on the guard bringing the ball up the court, but taking some chances with close ups to show the emotion of the game. The basic coverage is still what it is, it's just now we have more toys to play with.”

Nantz can't think of the last time he has seen Fishman make an error to a broadcast. Nantz was struck by Kevin Costner's soliloquy about film directors during last Sunday's Academy Awards and how they apply to sports.

“Directors in sports television don't get the same acclaim, but this is a live animal here,” Nantz said. "There are no second takes. You don't have time to set up shots on the fly. There are 1,000s of decisions you have to make inside of one broadcast. It’s not cookie cutter. It’s snap decision making.

“I'm just lost in admiration for everything Bob Fishman has done.”

During the first two weeks of the NCAA Tournament, Fishman has gotten emotional a couple times, but he has said there are other things projects he is looking forward to doing. He also hasn't ruled out a return to do some more sports television work down the line.

“I am trying not to think about Monday night's championship game. I am sure I will be a wreck when when I roll that ‘One Shining Moment’ tape for the final time,” he said. “My family is going to be in New Orleans, and you know I am kind of ready to move on and do some other things in my life.”