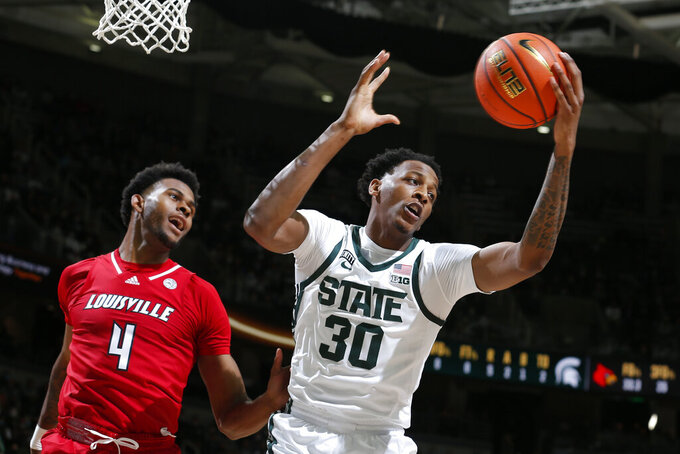 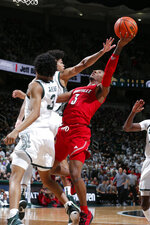 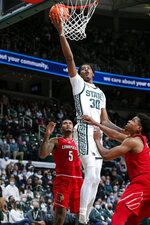 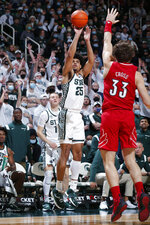 EAST LANSING, Mich. (AP) — Malik Hall was the best player No. 22 Michigan State had on the court for stretches, showing flashes of his potential that coach Tom Izzo would like to see more often.

Hall scored eight of his 15 points in a 1:34 stretch early in the second half, helping the Spartans build a big lead they needed to hold off Louisville 73-64 Wednesday night in the Big Ten/ACC Challenge.

“Malik is a real good player," Izzo said. “What we’re looking for him is some consistency."

Hall had a career-high 24 points in last week's win over Loyola Chicago, then scored just two points in a win over then-No. 22 Connecticut and three points in the loss to No. 4 Baylor, in part because of an ankle injury.

The truth is, the Spartans (6-2) overcame an ongoing problem with 19 turnovers by playing well in spurts and making 10 of 18 3-pointers.

“If you told me we’d be 6-2 after the schedule we’ve played, I’d take it," Izzo said. “I’m not satisfied because of the turnovers."

The Cardinals (5-2) led late in the first half, trailed by just two points shortly after halftime and fell behind by 20 midway through the second half.

Louisville's El Ellis scored 16 of his career-high 22 points in less than six minutes, cutting the deficit to eight points with 1:26 left, but the visitors couldn't get closer.

“The first 28 minutes, we certainly weren’t perfect, but we were battling," coach Chris Mack said.

Dre Davis scored 15 points and Malik Williams had 10 for the Cardinals, who made just 41% of their shots and were 7 of 27 on 3-pointers.

“We’ve got to be able to figure out how to get the basketball in the lane efficiently so that we can get to the free throw line, so that we can open up even better looks than we’re getting," Mack said.

BACK FROM THE BEACH

Both teams were coming off a strong showing in the Bahamas.

Michigan State won two games, including over then-No. 22 Connecticut, before losing to No. 4 Baylor in the Battle 4 Atlantis final. Louisville beat Mississippi State and Maryland to win the Baha Mar Hoops Bahamas championship.

Louisville: Mack returned from a six-game suspension handed down by the school for failing to follow procedures in handling an extortion attempt by one of his assistants. It may take the fourth-year coach some time to get back into a groove to install an up-tempo offense with a new-look roster that includes eight newcomers.

Michigan State: Izzo’s squad back if the problem doesn’t get fixed. The Spartans went into the game averaging 15.7 turnovers, ranking No. 304 out of 350 teams.

“If we want to be a championship team, we have to be better on turnovers," Hall said.

Michigan State didn’t have a turnover in five-plus minutes to start the game, then had nine turnovers in the first half and two more in the opening minute of the second half.

Izzo said he was perplexed how often his players turned the ball over because they were simply out of bounds.

“I might put one of those dog fences in and when they step out of bounds, they’ll get zapped," he joked.

“There’s a physicality you have to play with at the offensive end, and we didn’t do that," Mack said. “Give Michigan State a lot of credit. They’re one of the best defensive teams in the country."

The Spartans earned a spot in the AP Top25 for the first time after starting the season unraked and will likely stay in the poll next week.