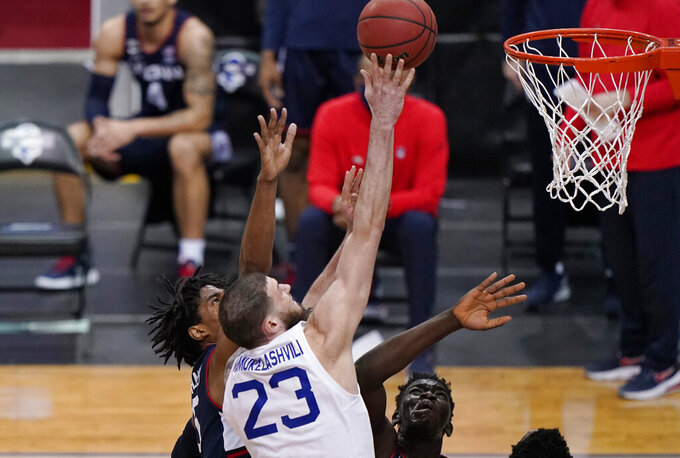 The league announced the team Sunday based on a vote of the coaches. They were not allowed to vote for their own players.

The other four first-team members are James Bouknight of Connecticut, Marcus Zegarowski of Creighton, Julian Champagnie of St. John’s, and Collin Gillespie of Villanova, which won the regular-season title.

One of the six will be the conference's player of the year. The award will be announced Wednesday along with coach of the year, freshman of the year and scholar-athlete.

The league's tournament is scheduled to start Wednesday at Madison Square Garden.

Mamukelashvili is second in the conference in scoring, averaging 17.8 points. He was sixth in rebounding with a 7.2 average.

Zegarowski, the conference's preseason player of the year, averaged 15.4 points, seventh in the league, and 4.4 assists, fifth best.

Bouknight averaged 20.2 points and 5.6 rebounds. He played in 12 of UConn’s 20 games due to a mid-season elbow injury.

Champagnie led St. John’s with a 19.9 scoring average. He is first in free throw shooting, making 88.7%. In conference play, he is the league’s scoring champion, averaging 19.5 points.

Gillespie averaged 14.0 points and ranked third in the league in assists (4.6). He was injured in Wednesday’s victory over Creighton and will miss the rest of the season.