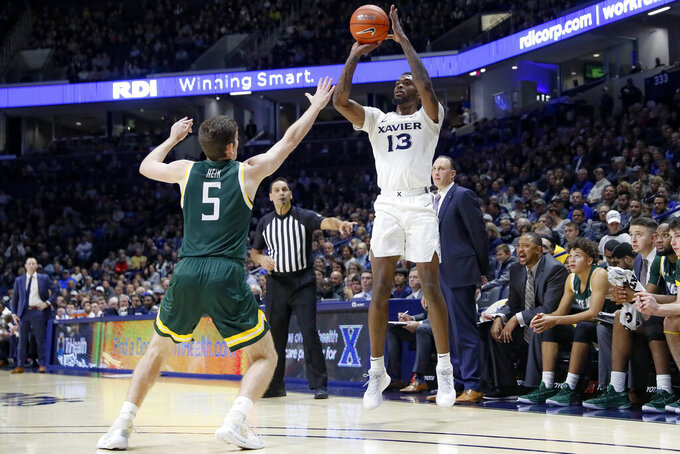 CINCINNATI (AP) — Tyrique Jones finished as one of Xavier's leading scorers. His biggest contribution may have come during the first media timeout.

The Jones, a senior, lit into his teammates for what coach Travis Steele described as sloppy play against Siena.

"We were trying to hit home runs too much, and that was leading to easy baskets for Siena," Steele said. "I let them know it, and Tyrique did, too. He said it was unacceptable. He was a great voice in that timeout. He's like an extra coach on the floor."

Jones then went out and led by example. He and Naji Marshall each scored 20 points and No. 19 Xavier beat Siena 81-63.

"I can't say word-for-word what was said," Jones said. "I just said take care of the ball and play our game. We did that, and we got what we wanted."

The Musketeers led by as many as 27 points in the second half.

"Siena got off to a good start," Steele said. "Our guys weren't ready, especially on defense. We communicated much better in the second half. You can see great defense, but I've always said you should be able to hear great defense."

Jones needed just 20 minutes to score his 20 points, two short of matching his career high. He had 12 in the first half, eight on four crowd-pleasing dunks. He ran down the court celebrating with the "raise the roof" gesture after the third dunk.

After committing turnovers on their first three possessions within 90 seconds, the Musketeers capitalized on Siena's poor shooting. Siena went 1 for 11 from the field in one stretch, while Xavier put together a 14-1 run and took a 26-16 lead with 6:03 left in the first half.

The Musketeers turned the ball over just eight more times the rest of the way.

"We didn't play well in the first half, and we were still up by nine points at halftime," Steele said. "We finished with 11 turnovers, which is our goal, and we settled down defensively."

Xavier has won its last four games against Siena to improve to 4-1 in the series.

Xavier junior guard Paul Scruggs, who scored 12 points in 29 minutes during the Musketeers' season-opening win over Jacksonville, did not play because of a knee injury.

Siena sophomore walk-on Jimmy Ratliff played just over 11 minutes in a sort of homecoming. Ratliff is a native of Middletown, Ohio, about 25 miles north of Cincinnati. Thirty family members and friends were on hand for the game.

Officials whistled a total of 45 fouls, 25 on Siena.

Xavier: Hosts Missouri on Tuesday in the third of four season-opening home games.