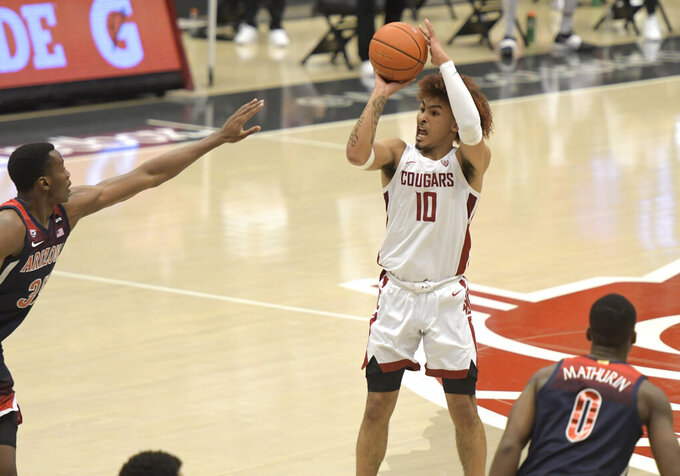 Mathurin was 8-of-12 shooting and finished with career highs of 24 points and 11 rebounds and Brown scored 15 points. James Akinjo added 18 points, six assists and three steals and Azuolas Tubelis had 12 points and nine rebounds for Arizona (9-1, 3-1 Pac-12).

Brown's 3-pointer broke an 81-all tie and, after WSU's Isaac Bonton made 1 of 2 from the free-throw line, Mathurin hit two foul shots with nine seconds left to cap the scoring.

Bonton led the Cougars with 25 points. Noah Williams scored 16, Andrej Jakimovski added 15 and Efe Abogidi had 12 points, eight rebounds, three blocks and two steals before fouling out about 30 seconds into the first overtime.

WSU was outscored 25-19 from the foul line despite attempting five more (37) free throws than the Wildcats. The Cougars made just 5 of 14 from the stripe after regulation.

Brown hit short jumper to give Arizona a six-point lead with nine minutes left in regulation but Bonton 12 points before Abogidi's layup that made it 70-all with 23 seconds left forced overtime.

Brown's layup with 12 seconds left in the first OT forced the second overtime.