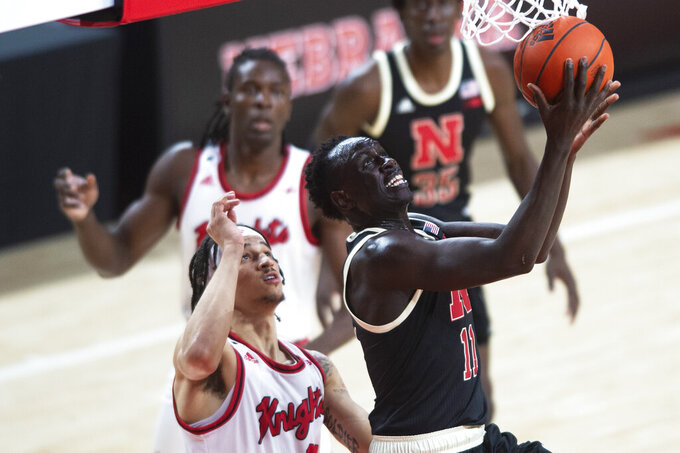 Nebraska's Lat Mayen, right, goes under the basket to score against Rutgers' Caleb McConnell in the first half of an NCAA college basketball game Monday, March 1, 2021, in Lincoln, Neb. (Kenneth Ferriera/Lincoln Journal Star via AP)

Derrick Walker had 14 points and six rebounds for Nebraska (7-17, 3-14 Big Ten Conference). Trey McGowens had 12 points and five, and Nebraska had a season-high 19 assists on 28 field goals. The Cornhuskers won their second straight game — the first time doing so since beating North Dakota State and then South Dakota on Dec. 1.

Just last week, Allen scored a Pinnacle Bank Arena record 41 points in a 86-83 loss to Penn State. But he was limited to seven points in 20 minutes in a loss at Illinois two nights later, and he was not in the starting lineup for a home game against Minnesota on Saturday. He was averaging 16.5 points per game,

“After a lot of thought over the last few days, I have made the decision to focus on getting fully healthy in preparation for the next step in my basketball journey,” Allen said. “I will continue to stay at Nebraska for the spring semester and work toward graduation. I am looking forward to what the future holds, as I explore my options.”

Nebraska is scheduled to play No. 5 Iowa on Thursday followed by Northwestern on Sunday to close the regular season. Rutgers plays Minnesota on Saturday.