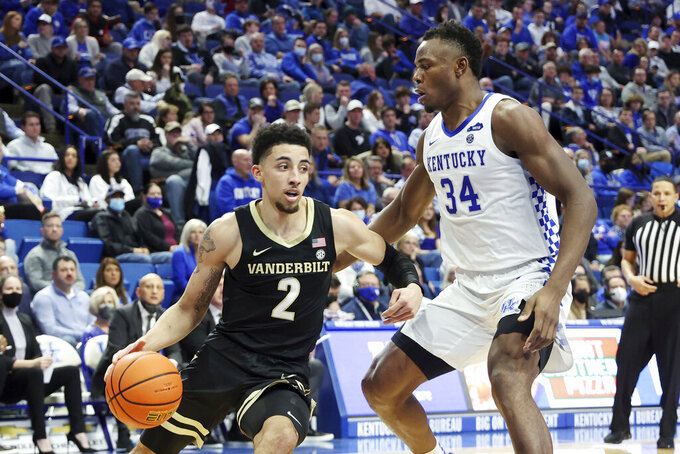 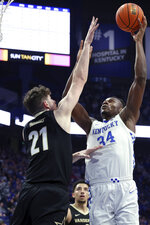 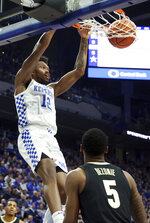 LEXINGTON, Ky. (AP) — Kentucky had to fight for everything it got against Vanderbilt, and Davion Mintz helped deal the biggest blow for the No. 5 Wildcats.

Mintz scored a season-high 21 points off the bench, hitting a 3-pointer during a pivotal 11-2 run, and Kentucky overcame nearly blowing a double-digit lead and its cool to survive Vanderbilt 77-70 on Wednesday night for its third consecutive victory.

After having it surprisingly easy on Saturday at then-No. 5 Kansas, Mintz wasn’t shocked by the battle it got from Vanderbilt. Even affable forward Oscar Tshiebwe got caught in the moment, drawing two flagrant fouls among four.

“When teams come in here, they want to play hard,” said Mintz, who hinted at having scratches on his arm going for a rebound. “The SEC is a competitive conference and Vanderbilt came to fight and so does every other team we play in this conference.”

The Wildcats (18-4, 7-2 Southeastern Conference) twice led by 10 in the second half, but the Commodores eventually closed to 56-53 with 9:28 remaining. Keion Brooks Jr. answered with a jumper, Lance Ware made a free throw and Mintz took Sahvir Wheeler’s baseline pass to make a wide-open 3 from the right corner for a 62-53 advantage with 7:23 remaining.

Mintz was the latest Kentucky player to score at least 20 points in a game this season.

“Davion played unbelievable today,” coach John Calipari said. “Really, really good. And you know who was happy for him? TyTy (Washington). Hugged him. That’s what this team has been.”

Pippen had 33 points for his second 30-point outing this season against Kentucky, making 11 of 23 from the field. Jordan Wright had 14 points for the Commodores (11-10, 3-6), who sought their first win over Kentucky since 2016. Vanderbilt was coming off a season sweep of Georgia.

The second half was tense and chippy, with Kentucky's Tshiebwe twice whistled for flagrant-1 fouls and Vandy's Jamaine Mann called for one. Wildcats coach John Calipari drew a technical foul in the first half before Commodores counterpart Jerry Stackhouse picked up one after halftime.

“I thought our guys were battling hard, just wanted to make sure we gave ourselves a fair chance to win the game,” Stackhouse said.

“We had a stretch in there that we were playing hard, and I didn’t feel like our guys were getting the benefit of the doubt, so I’m going to always ride for my guys and make sure that they know I’m supporting them in their effort.”

Vanderbilt wasn’t done despite digging a halftime hole with 11 turnovers. They got out of their own way and twice rallied to within a possession after halftime but couldn’t finish.

Kentucky faced more resistance from Vandy than at Kansas and had to work harder for looks. The Wildcats shot just 28% in the second half as a result, but got a huge basket with Mintz’s 3 off a beautiful feed from Wheeler. They finished 39% shooting.

Vanderbilt: Hosts No. 25 LSU on Saturday.

Kentucky: At Alabama on Saturday.