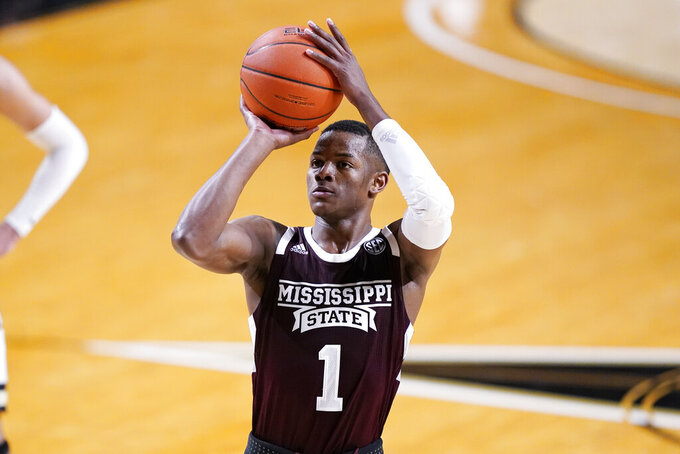 FILE - Mississippi State guard Iverson Molinar (1) plays against Vanderbilt in the second half of an NCAA college basketball game in Nashville, Tenn., in this Saturday, Jan. 9, 2021, file photo. Ben Howland believes Mississippi State could be one of his best squads since arriving in Starkville. Molinar’s offense was key to the Bulldogs’ NIT run, and he’s a preseason All-SEC first team selection. (AP Photo/Mark Humphrey, File)

Ben Howland believes Mississippi State could be one of his best squads since arriving in Starkville.

Even if it’s a while before the Bulldogs are at full strength.

The seventh-year coach has plenty to like about a squad eager to follow up last year’s NIT berth with a NCAA Tournament appearance. MSU (18-15, 8-10 Southeastern Conference) returns two of its top three scorers in guard Iverson Molinar (16.7 points per game) and forward Tolu Smith (12.6 points, 8.5 rebounds), though Smith is out until late November following foot surgery.

Molinar’s offense was key to the Bulldogs’ NIT run, and he’s a preseason All-SEC first team selection. That indicative of the expectations he faces, and Howland liked what he saw of his point guard early in preseason.

“He’s worked incredibly hard this offseason,” the coach said, “and I think he really made another nice big jump, especially at decision making. He’s done a lot of things to grow as a player between the end of last year to now.”

What has Howland most encouraged are several transfers he believes will address needs at key spots. The most notable newcomer is 6-foot-10 former North Carolina standout Garrison Brooks, the son of longtime MSU assistant coach George Brooks. He averaged 10.2 points and 6.9 rebounds per game with the Tar Heels after being named Atlantic Coast Conference preseason player of the year.

Howland won’t rush his injured players back and will let them get in shape at their pace. Besides, last season proved the importance of putting the pieces together at the right point in the season.

“With that run, it kind of gave us confidence, like, we know what we’re capable of,” Molinar said. “With most of the people returning from last year, we’ve got a lot of confidence with this team, and with the new additions.”

The Bulldogs’ goal this time around is a return to the Big Dance.

Some other things to watch in Mississippi State’s season:

Iverson Molinar was consistent in many phases as a sophomore, scoring 500 points behind 48% shooting overall and 44% accuracy from deep. He finished second to D.J. Stewart with 69 assists but is ready to assume a bigger role directing the offense.

“Something I’ve been working on and still working on is making plays for others,” he said. “Making sure I see the open guy as a point guard. That’s something I’m really focused on this year.”

Howland has been encouraged by the added dimension he’s seen from Garrison Brooks, who was the ACC’s Most Improved Player a couple of seasons ago. Brooks has displayed his perimeter game, with the coach claiming to have seen him hit 45 of 50 from long range during one workout. Even something half as good during the season gives the Bulldogs another option after they ranked mid-pack from behind the arc in the SEC.

Rocket Watts, a 6-2 guard, had 460 points and 121 assists over two seasons at Michigan State and was an All-Big Ten Conference freshman team selection. Shakeel Moore, 6-1, averaged 6.8 points and 2.5 rebounds per game in 25 games as a N.C. State freshman.

MSU was one of the SEC’s better shooting teams last season, making 45% from the field. Free throws were another matter as the Bulldogs made just 66% from the free throw line and were one of the league’s worst in that category. That’s been a point of focus as they if they aim to contend.

MSU opens on Nov. 10 against North Alabama. Its first big test is Nov. 25 against ACC member Louisville in the Baha Mar Hoops Championship in the Bahamas, where the Bulldogs could also face Maryland or Richmond. Minnesota visits on Dec. 5, with Arkansas coming in on Dec. 29 in the SEC opener. MSU will also visit Texas Tech on Jan. 29 in the Big 12/SEC Challenge.