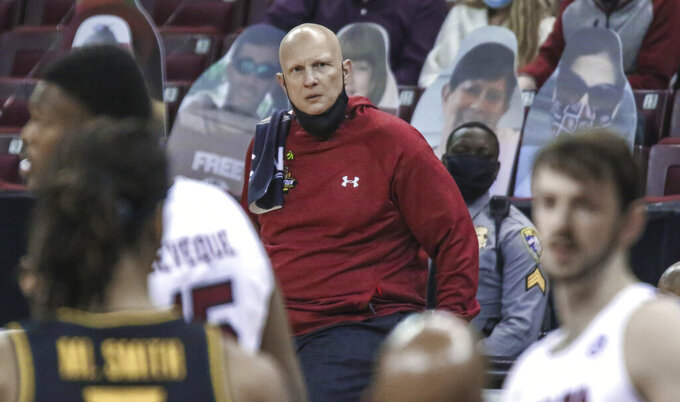 COLUMBIA, S.C. (AP) — South Carolina's men's basketball program was placed on probation for two years by the NCAA on Thursday for former assistant coach Lamont Evans accepting between $3,300 and $5,800 in bribes from a sports agent.

The NCAA's decision put an end to South Carolina's role in the college basketball corruption case that began in 2017.

The Gamecocks largely avoided more serious penalties like a postseason ban for what the NCAA deemed a Level I infractions case. South Carolina coach Frank Martin was not named in any NCAA allegations.

“We move forward and I am thankful to have this situation behind us,” Martin said in a statement.

The NCAA said the case was resolved by using a cooperative summary disposition, a process in which involved parties collectively submit the case to the committee in written form. All participating parties must agree to the facts of the case for this process to be used instead of a formal hearing.

The committee classified the case as Level I-mitigated for the school and Level I-aggravated for the former assistant coach.

Along with the probation, the NCAA accepted South Carolina's self-imposed sanctions, including a reduction in unofficial visits from prospects for this season and next, a six-week ban on telephone recruiting and a $5,000 fine.

South Carolina athletic director Ray Tanner said he was proud of his department's response to the NCAA. He said the NCAA's choice to accept the school's proposed sanctions validates the work done by his staff and men's basketball.

“Once we became aware of this situation, we were proactive in determining what happened and worked in cooperation with the Department of Justice and the NCAA,” Tanner said.

Martin said from the start he had no knowledge of Evans' actions. “I lead my program with transparency, an open-door policy and with integrity,” he said. “It is in my heart and it is at the core of who I am.”

South Carolina received the NCAA's notice of allegations in January 2020.

The NCAA imposed a 10-year show cause order for Evans, meaning any school that tries to hire him must restrict him from any athletically related duties unless it shows cause why the restrictions should not apply.