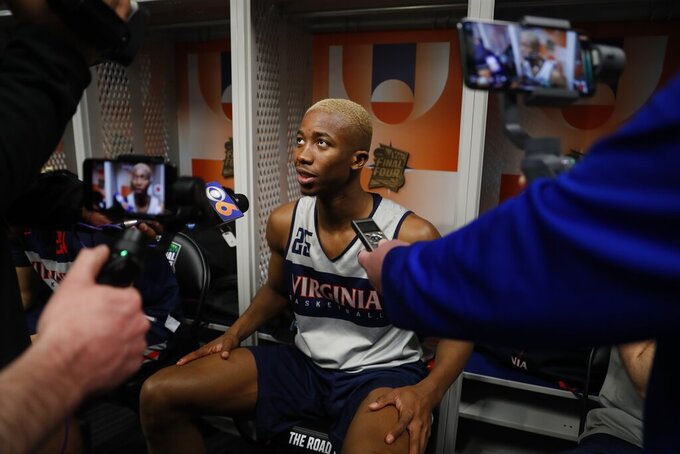 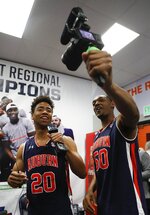 MINNEAPOLIS (AP) — The Latest on the Final Four of the NCAA Tournament (all times local):

Shortly before taking home the AP coach of the year trophy Wednesday, Texas Tech's Chris Beard recalled a very different trophy he spent decades thinking about before finally getting his hands on it.

The story goes like this: Beard saved up all his money as an eighth- or ninth-grader to attend Texas Tech's basketball camp, which was run by then-coach Gerald Myers. Beard wound up winning the "hot shot" competition and should have received a trophy, but the camp had run out of them.

"I was so pissed off," Beard said. "There was no internet, and long-distance phone calls were about 60 cents a minute. I wrote a bunch of letters to the Texas Tech office."

Beard kept quiet when he got a job as Bob Knight's assistant years later, but he couldn't hold back when Texas Tech hired him as head coach. He walked over to Myers and said, "I'm not pissed off. I'm kind of upset. Thirty-something years I still hadn't gotten my trophy."

All's well that ends well: Not long afterward, Myers dropped by his office with trophy in hand.

Of all the Final Four coaches, Michigan State's Tom Izzo is the most familiar with this year's site, since the Spartans play in Minnesota almost every season.

Izzo's ties to the state stretch beyond it simply being the home of a Big Ten foe. He's friendly with Vikings quarterback Kirk Cousins, who played football for Michigan State from 2007-11, and he hopes to have Cousins speak to his team on Friday.

Izzo spoke highly of former Gophers coach Clem Haskins, whose teams were among his toughest opponents in his early years at Michigan State after taking over in 1995. And there's no one in Minnesota that Izzo is more fond of than Timberwolves coach Ryan Saunders, the son of the late Flip Saunders, who was a close friend of Izzo through coaching circles over the years and asked Izzo to be one of his assistants for the U.S. team in the Goodwill Games in 2001.

Ryan Saunders speaks to Izzo often, including the night after Michigan State beat Duke to advance to the Final Four.

NCAA President Mark Emmert says the association's membership wants to prohibit college athletes from gambling on sports, despite changing laws around the country to make it legal in some states.

Emmert held his annual Final Four news conference Thursday at U.S. Bank Stadium in Minnesota. He said the NCAA remains committed to pushing for federal guidelines around wagering on sports for states to follow.

"We need to try to make sure that we know that everyone is working off consistent data and information because that becomes a source of a lot of bad behavior when you've got lots and lots of different data sources," Emmert said.

The NCAA has indefinitely lifted its ban on holding its championship events in states where gambling is legal. NCAA legislation would need to be passed to permanently change that rule. The association seems to be moving in that direction, while also being in no rush. The NCAA, however, appears steadfast in keeping in place the ban on athletes betting on sports.

"The membership wants a prohibition of athletes gambling in any sports, period," Emmert said.

College athletes are currently banned by NCAA rules from betting on sports.

Virginia's Mamadi Diakite and Kihei Clark haven't been able to resist watching multiple replays of their season-saving play that helped the Cavaliers reach the Final Four.

Clark ran down a tapped-out missed free throw in the final seconds of regulation in Saturday's regional final against Purdue. He passed ahead to Diakite for a buzzer-beating shot that forced overtime and ultimately helped Virginia reach its first Final Four since 1984.

The play was a popular topic of conversation during locker-room interviews Thursday in Minneapolis, too.

Diakite said he had received a standing ovation in a class and has been getting many picture or autograph requests. Asked how many times he watched the replay, Diakite said: "I don't know any more. I lost count after 45."

Clark said watching the play seems longer now, but "it went by so fast in the game."

"One of my friends (texted) congratulations on the Elite Eight when we made the Final Four. I said, 'Bro, we made it to the Final Four,'" said the Virginia center, who grew up in Auckland with little knowledge of big-time college basketball. Salt said the first Final Four he recalls watching was 2013, when Michigan and guard Trey Burke played Louisville in the championship game.

The 6-foot-11 Salt made the tap out of a rebound on a missed free throw that eventually led to Mamadi Diakite's buzzer-beater to send Virginia to overtime against Purdue in the Elite Eight. Salt wants too clear something up about that play. He was shouting at Diakite as the clock wound down, but he was not calling for the ball closer to the rim.

There is a line in Auburn forward Anfernee McLemore's school bio that says he was accepted to MIT.

"That's a rumor," McLemore acknowledged Thursday, "just to debunk that."

So where did he get accepted?

Nice fallback options. But after McLemore started playing basketball as a freshman in high school, he was set on playing in college. Auburn came calling an offer to play in the SEC, and that trumped his desire to play at a smaller, academic-minded school with little chance of making the Final Four.

By the way, it wasn't that MIT turned him down, either.

"I never even applied to MIT to get accepted," the business major said.

Always let them see you sweat.

Auburn coach Bruce Pearl is known for getting a bit heated while working the sidelines, but that doesn't mean he'll be changing his wardrobe at the Final Four.

Pearl's son, Auburn assistant Steven Pearl, says the coach doesn't bring extra shirts to games, and that the only concession he makes to cope with his perspiration problem is that he occasionally wears shirts provided by a company that designs them to better absorb sweat.

At halftime, there is no wardrobe change.

The coach just takes off his sports coat and cools down.

Then, the coat goes back on, and Pearl gets back to work.

"His give-a-crap factor is so low that he doesn't really care about people making fun of him for sweating through his shirt," says Pearl's son, Auburn assistant Steven Pearl. "He's more concerned about coaching his team and getting them ready."

Chuma Okeke's presence is still being at the Final Four, even though the Auburn standout was forced to stay behind after having surgery Tuesday to repair the torn ACL in his left knee.

Several teammates have written his initials or number on their gear, and Okeke's locker remained empty when the Tigers arrived Thursday. Samir Doughty took advantage of that fact by lounging in it while dozens of reporters packed into the cramped dressing room.

Okeke was having a big game in the Tigers' semifinal win over North Carolina when his knee buckled underneath the basket. He was planning to watch his team's regional final against Kentucky from his hotel room but changed his mind, arriving in a wheelchair to watch the second half near the bench.

Dr. James Andrews performed the surgery this week in Florida.

Auburn beat the bluest of blue blood programs on the way to the Final Four. The Tigers knocked off Kansas, North Carolina and Kentucky in their last three games. The last team to do that was Arizona in 1997, when the Wildcats won the NCAA title.

The fifth-seeded Tigers have been the lower seeded team in their last three games, embracing their underdog status. Forward Daniel Purifoy said he has had a group of friends letting him know the chances some advanced metrics have been giving Auburn to win throughout the tournament. It was 37% to beat North Carolina, 39% to beat Kentucky and now it's 7% to win the NCAA championship, Purifoy said.

Fans at the Final Four in Minneapolis will find a special food item in honor of each team. Aramark, the concessionaire for U.S. Bank Stadium, announced the signature snacks for the games this weekend.

For Auburn, there are "Tiger Paw Pork Skins," fried and topped with spicy mayonnaise and green onion.

For Texas Tech, there's the "Big Tex Nacho," a bowl of nachos topped with chili, sour cream, guacamole and salsa.

And for Virginia, there are "Wahoo Shrimp and Grits," with a creamy red sauce.

Auburn, Virginia, Michigan State and Texas Tech have arrived in Minneapolis for the Final Four.

Teams will practice on Thursday and hold open-to-the-public workouts on Friday. The national semifinals are on Saturday, when Auburn faces Virginia and Michigan State takes on Texas Tech. The championship game is on Monday.

The last time Minneapolis hosted the Final Four was in 2001, when Duke beat Arizona for the title at the Metrodome. That stadium was torn down in 2014 to make room for U.S. Bank Stadium, the $1.1 billion building that opened in 2016.

Michigan State was in the Final Four in 2001, too, one of 10 times the Spartans have made it. Virginia is making its third appearance. Auburn and Texas Tech are first-timers.