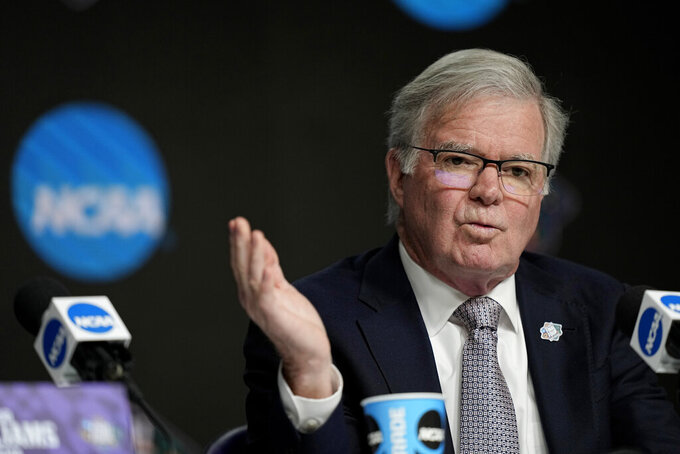 What solutions might be on the table to speed it up, Emmert did not say, but there appears to be increasing acknowledgement that the current process is broken.

“It’s just been really slow in getting through that new independent process that’s wound up reinvestigating the entire case,” Emmert said, referring to the Independent Accountability Resolution Process (IARP).

The IARP was created out of proposals from the commission led by former U.S. Secretary of State Condoleezza Rice in 2018 to reform the sport. It began looking into allegations against Kansas, Arizona, LSU, Louisville and North Carolina State on the heels of a federal investigation into corruption in college sports that resulted in convictions of shoe company executives, a middle man who worked with them and some assistant college coaches.

Of those FBI cases nearly five years ago, only one -- North Carolina State, tied to its recruitment of one-and-done star Dennis Smith Jr. -- has actually gone through the IARP system to completion and received a ruling that resulted in probation for one year, some vacated victories and penalties for previous coaches.

The four other cases are still pending in the IARP structure, while Auburn went through the more traditional process and received four years of probation in December from an NCAA infractions committee panel.

In the meantime, this year's NCAA Tournament could be tainted should Kansas win the national championship and subsequently have an unfavorable decision come down in a now half-decade-old investigation.

Created to handle complex cases, the IARP includes independent investigators and decision-makers with no direct ties to NCAA member schools, and rulings cannot be appealed.

Emmert said NCAA institutions need to come up with a process that has “got to be fair. It’s got to be swift. And it’s got to not punish the innocent. ... That’s where the membership’s got to be in all of this, as they shape a new process or rebuild the one that’s in place.”

The Kansas case hinges on whether Adidas representatives were considered boosters — the school contends they were not — when two of them arranged payments to prospective recruits. Kansas does not dispute the payments. Kansas asked for referral to the IARP instead of having the NCAA's infractions committee handle the matter.

While the lengthy IARP process has been going on, Self agreed to a new contract on April 2, 2021, that will keep him with the school until he retires.

The five-year deal adds one additional year after the conclusion of each season — in effect, making it a lifetime contract. It guarantees him $5.41 million per year with a base salary of $225,000, professional services contract of $2.75 million and an annual $2.435 million retention bonus.

The contact also includes a clause that says the school cannot terminate him for cause “due to any current infractions matter that involves conduct that occurred on or prior to” the signing of the new contract. Instead, he would forfeit half of his base salary and professional services pay while serving any Big 12 or NCAA suspension.

Emmert declined to weigh on on Kansas' decision to double down on Self.

“I’ll leave it to the school to make decisions about their coaches’ contracts,” said Emmert, who also spoke at the women's Final Four on Wednesday. “That’s their business, obviously. They can do that as they see fit.”

The infractions process has also come up with the Division I Transformation Committee, which is working to recommend ways to modernize and reform NCAA governance and regulatory policies.

Southeastern Conference Commissioner Greg Sankey, who chairs the committee along with Ohio athletics director Julie Cromer, said the group is looking at both the overall infractions process and the IARP structure as part of its work.

“I don’t know fully what was envisioned and what wasn’t envisioned,” said Sankey, who has served on the NCAA infractions committee. “But we have to have timely outcomes, both for those accused and for those competing against those who are accused. That has to be a point of emphasis.”

Later, Sankey added: “I was on an implementation working group, and I disagreed with elements of the approach. So I think some of these problems were foreseeable. We have an opportunity to correct and enhance the process. That doesn’t mean everybody will like the process.”

Among other topics Emmert addressed:

Emmert offered an urgent plea to Congress to craft what he said was needed, uniform national legislation governing financial endorsements for athletes known as name, image and likeness (NIL) deals.

“This tournament’s put on full display the beauty of college sport,” Emmert said. "People love it and enjoy it, and we’ve got to work with the schools and with Congress to make sure we can continue that.

“We’ve got again a relatively short window of time — in my estimate, one and two years,” Emmert continued. “These decisions have to be made because of the dynamics that are underway right now that are far beyond the control of schools, coaches, (athletic directors) or presidents.”

Currently, more than 30 states have been working on their own NIL laws.

With a number of states considering or passing legislation restricting participation of transgender athletes, Emmert was asked whether the NCAA would bar those states from hosting championship events.

The NCAA has largely followed the Olympic model that allows transgender athletes to compete if they've had certain biomedical treatments, including hormone therapies, meant to promote fairness.

Emmert said the NCAA currently requires communities which wish to host events “to explain how it is that they’re going to make sure that the participants in that sport will be allowed to do that in a nondiscriminatory way. ... If they can do that, then we’ll be in those states."

Emmert said the current transfer rules continue to draw a lot of scrutiny and complaints from coaches and could be adjusted over time.

“The only thing that I can say right now is that it’s clear that students are getting more opportunities to play. They’re getting more freedom of movement in some respects,” Emmert said.

But he added that officials are keeping an eye on how the rules affect “students being able to finish their degrees in a timely fashion and go on and lead productive lives, because we know how few of them will be professional basketball players. It’s a constant point of discussion. I don’t anticipate it going away too soon.”