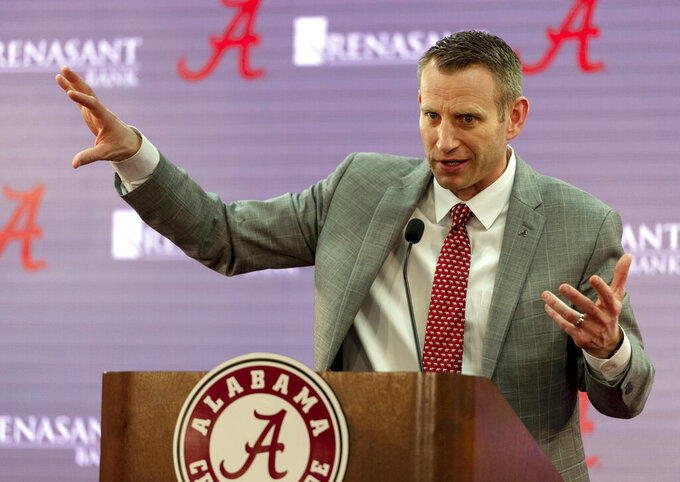 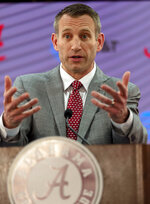 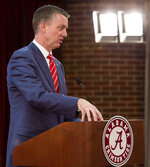 TUSCALOOSA, Ala. (AP) — Nate Oats was a high school coach and math teacher making a five-figure salary six years ago.

Then he made a rapid ascent as a Buffalo assistant and head coach and is now set to lead Alabama . The men's basketball program hasn't kept pace in the Southeastern Conference, which has grown stronger overall in recent years.

But Oats did the math and believes the Crimson Tide can make it to Final Fours, though the program never has.

"Obviously, the money doesn't hurt, but it's more about 'OK, how high a level can you take'" the program? Oats said Thursday after being formally introduced as the new Tide coach. "I'd like to play for national championships. I'm a competitor, I'm ultra-competitive on everything.

"Can you do that here? Yeah, I believe you can. I mean, they proved it in I don't know how many other different sports. You go through the list of sports that have won national championships here, they've got a bunch of them. Football competes for it every year. There's no reason we can't get to that level."

Oats agreed to a five-year deal, but Alabama athletic director Greg Byrne declined to release financial terms of the contra. Oats is replacing Avery Johnson, who made one NCAA Tournament in four seasons.

While Alabama has only been to the NCAA Tournament twice since 2006, Buffalo made the field three times in Oats' four seasons since replacing Bobby Hurley as head coach. The Bulls are coming off a 32-4 season and back-to-back Mid-American Conference regular season and tournament championships.

Oats' first recruiting visit was with freshman leading scorer Kira Lewis Jr., among the Tide players reportedly exploring a possible transfer. He said Lewis stood out when he was watching Alabama film before interviewing for the job.

"I'm going to do everything I can to make sure he's playing in an Alabama uniform next year," Oats said.

Guard Dazon Ingram has already announced plans to leave as a graduate transfer.

Oats said he "100 percent" has to recruit the current players.

Byrne announced the hiring on Wednesday after spending five hours with Oats and his family in Buffalo. Byrne said he spoke with "several" candidates but Oats' interview went on twice as long as any of the others.

Byrne reached out to Michigan State Tom Izzo, a friend of Alabama football coach Nick Saban since their days as young Spartans coaches, to pick his brains about potential candidates.

"As soon as Nate Oats came up, he was like, 'Hey, that guy's a grinder,' I think was his first words to me."

Oats said he attended "hundreds" of Michigan State practices as a small-college assistant in Wisconsin and a high school coach in suburban Detroit. Plus, he attended game day shoot arounds and walk-throughs at hotels on the road.

"As much as they would let me be involved in, that's how much I was involved at Michigan State," Oats said. "I had that much respect for what Tom Izzo did. I never worked for him, but he was great to me. He speaks really highly of coach Saban."

Oats does, too. He said he has gone through every book, podcast and article he can find on Saban, who has won five national titles at Alabama and one at LSU.

Oats plans to bring in Buffalo assistant Bryan Hodgson but said he believes both Hodgson and Jim Whitesell, who is the interim coach, will interview for the chance to succeed him.

As for Oats, he didn't necessarily promise a quick turnaround but believes Alabama has the resources to go deeper in the NCAA Tournament than it has before. Wimp Sanderson, who led the Tide to the Sweet 16 six times from 1982-91, was on hand for Oats' introduction.