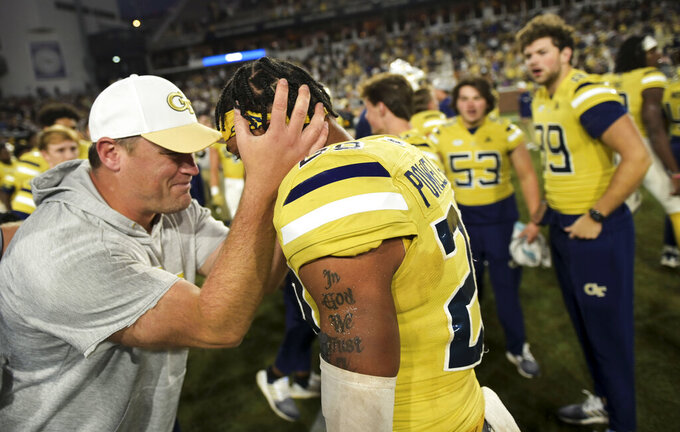 The fans will have to wait, however, to see how Batt goes about his business and learn how Brent Key performs as interim coach after a 2-0 start. Batt was planning with meet with Key on Monday afternoon.

“I’d say all of our sports are important,” Batt said at an introductory news conference. “Success broadly is important. Certainly the football program is important. Once I get here, I’ll certainly dig into it and spend time around that.”

Georgia Tech President Ángel Cabrera wasted no time hiring Batt to replace Todd Stansbury, who was fired Sept. 26 along with football coach Geoff Collins after the team got off to losing start for the fourth straight year. Collins went 10-28 with the Yellow Jackets for the worst winning percentage (.263) of any full-time football coach in school history.

Batt, 40, was hired Friday after a search led Cabrera and his committee to Alabama, where Batt served as executive deputy director of athletics, chief operating officer and chief revenue officer. His first day on the job at Georgia Tech will be next Monday.

“Resource generation, development, fundraising, finding a way to develop a long-term plan of working with our different administrations, partnering across campus, finding opportunities to get some wins with our folks,” Batt said. “That is going to be important and we’ll certainly tackle the football decision in time.”

Other than hiring a football coach, Batt’s top priority will be increasing revenues at a school that has faced tight budgets, fundraising struggles and attendance woes. The men’s basketball program also has struggled, making just one NCAA Tournament appearance since 2010.

“His leadership at one of the most competitive athletic programs in the nation and his extraordinary track record of fundraising and revenue generation will bring great value to Georgia Tech,” Cabrera said. “He also has first-hand knowledge of what it is like to be a student-athlete at a top academic institution. From our discussions, I am convinced that his values line up very nicely with our culture of excellence and integrity.”

Batt joined the Alabama team as senior associate athletic director in 2017 and was promoted to chief operating officer and senior deputy athletic director in 2021. This year, he received another promotion, to executive deputy director, COO and chief revenue officer. Batt oversaw the development and launch of the Crimson Standard, Alabama’s 10-year, $600 million capital initiative.

Batt was senior associate athletic director at East Carolina from 2013-2017 and served as an associate AD at Maryland from 2011-2013. Before that, he made stops at James Madison, William & Mary and his alma mater, North Carolina. Batt was a member of the Tar Heels’ 2001 NCAA champion soccer team.

“I’ve been at a lot of different places so that success has looked different at all those institutions,” Batt said. “Certainly I will get here, spend time looking, listening, watching and figuring out exactly what that success looks like as we hit the ground.”