No. 1 KU, No. 18 Villanova set to renew rivalry in Philly 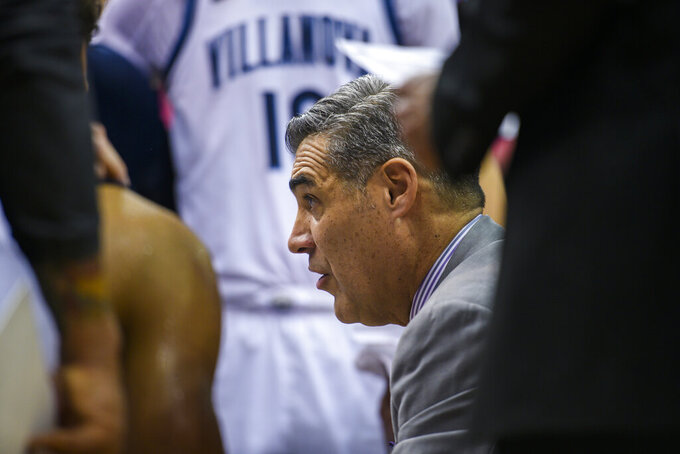 Villanova head coach Jay Wright talks to his team during a timeout during the second half of the Never Forget Tribute Classic NCAA college basketball game against Delaware, Saturday, Dec. 14, 2019, in Newark, N.J. (AP Photo/Corey Sipkin)

PHILADELPHIA (AP) — The Kansas vs. Villanova rivalry has become glorious to view for college hoops fans. The two championship programs are intertwined, as much as nonconference teams can be, since the start of the century. Through snowstorms and court stormings, NCAA championship runs and a father-son connection this season, the Jayhawks and Wildcats have experienced many memorable moments.

No. 1 Kansas (9-1) heads to Philadelphia on Saturday to play No. 18 Villanova (8-2) at the Wells Fargo Center, the home of the 76ers and their All-Star big man and former Jayhawk Joel Embiid.

Embiid scored 10 points against the Wildcats in his only game of the series, unranked Villanova's 63-59 win over No. 2 KU in the 2013 Battle 4 Atlantis tournament.

A nice win for the Wildcats, for sure, but certainly not the most meaningful.

"That's always been the beauty of the Kansas games," Villanova coach Jay Wright said. “I don't think you can find a more respected, historic program than Kansas. This one for us, we love."

When the final chapter on the Wright era is written, this victory is on the short list of games that will define the program. Wright was in his fourth season and had yet to lead the Wildcats to the NCAA Tournament. But led by future NBA superstar Kyle Lowry, long-time NBA vet Randy Foye and star guard Allan Ray, Villanova was on an upswing and just needed one big win that could change the fortunes of the program.

Philly was hit by a devastating snowstorm that wreaked havoc with travel for both schools and left the arena half empty. Inside the building, the Wildcats hit an avalanche of 3s. Curtis Sumpter hit five 3-pointers and scored 25 points, Ray made four 3s and scored 27, Lowry was ejected for throwing a punch in a scrum. Villanova led by as many as 32 points. Undefeated Kansas never stood a chance. Villanova students counted down the final minutes before storming the court in celebration.

"We hadn't really turned the corner yet," Wright said. "I remember getting on the bus to go the arena in a blizzard and I thought, what's worse that could happen? We had the No. 2 team in the country coming in, the place was sold out but no one was going to be there because no one was going to be able to get this game. I was like, this is the one chance we get."

They made the most of it, and would make the first of their 14 NCAA Tournament appearances under Wright.

KU raced to a 21-point lead and treated the Wildcats as just a speed bump on the road toward its only national championship under Self. Again, Villanova used the Kansas game as a sort of measuring stick for the program. Villanova made its first Final Four under Wright in 2009.

By 2018, the Wildcats had not only become a premier team like Kansas, they passed the Big 12 program on the list of the nation's elite. This one proved it in a matchup between two No. 1 seeds. The Wildcats hit a whopping 18 3-pointers and opened the game on a 22-4 run. They would win their second national championship (along with 2016) giving Wright a 2-1 edge over Self in titles. Self was a 2017 inductee into the Basketball Hall of Fame. Wright was announced this week as a nominee for the 2020 class.

"Jay's looked at differently now that he's won national championships," Self said. "I think coaches would beg to differ on that. Coaches have always known."

Villanova also beat Kansas in a 2016 Elite Eight game on the way to the national title. KU was again No. 1 last December when it knocked off the No. 17 Wildcats 74-71 in Allen Fieldhouse. There might be split loyalties on Saturday -- the Wildcats have gotten solid production from freshman Jeremiah Robinson-Earl, son of 1997-2000 Jayhawk Lester Earl.

The Wildcats won the 2005 snowstorm game, but it was a footnote by Monday morning; the Eagles won the NFC championship the next day. The Eagles have another big game on Sunday, a must-win against Dallas to keep their playoff hopes alive. Wright has tickets and wants to go, though his plans could hinge on the outcome against Kansas.

"It depends on if I'm crushed by this and can't deal with it," Wright said. "That's my only concern. I could stay at home for five hours watching film and not want to go. It's rare, but I could definitely do it."