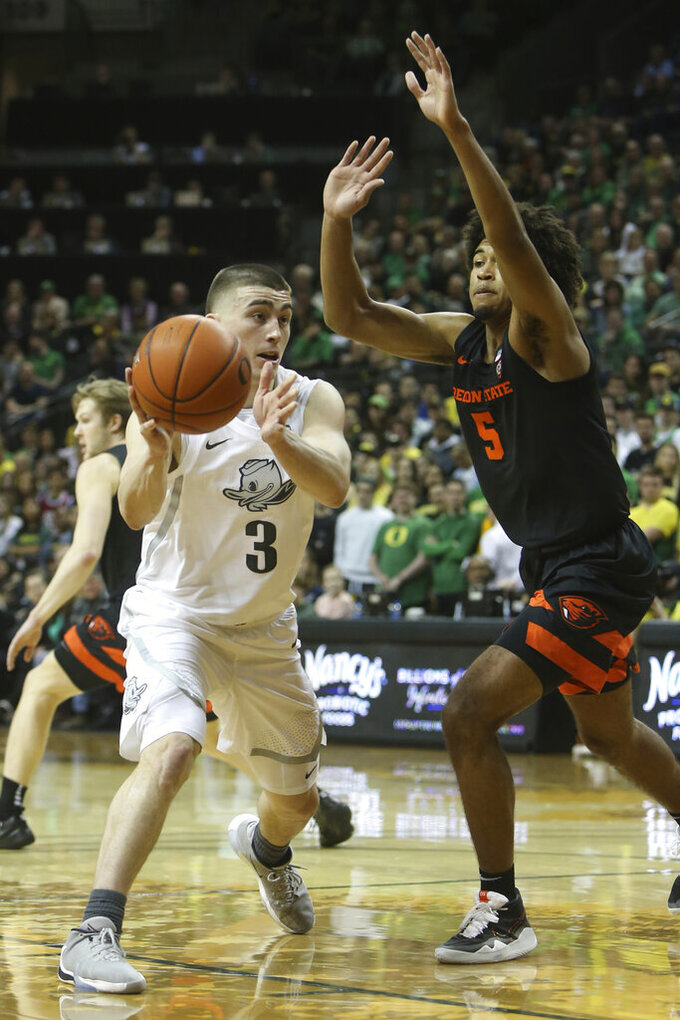 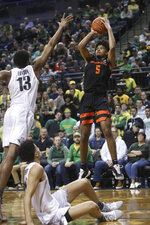 EUGENE, Ore. (AP) — Oregon wasn’t about to go down twice in one month against Oregon State.

Especially not with an opportunity to regain a share of first place in the Pac-12.

So with Payton Pritchard and Will Richardson providing the scoring, and an infusion of size for Oregon in this rematch, the 14th-ranked Ducks took over in the second half Thursday night on the way to a 69-54 win over the Beavers.

“There is a lot of ball to be played,” coach Dana Altman said. “We don’t have anything easy in front of us.”

Oregon finishes the regular season next week with home games against California and Stanford.

Pritchard scored 15 of his 23 points in the second half and Richardson added 13 of his 15 points after halftime to spur the Ducks, who had only a four-point lead at the break but started the second half with a 22-4 run to send the Beavers (15-13, 5-11) to their fourth consecutive defeat.

“They got a lot of momentum at the end of the (first) half,” Oregon State coach Wayne Tinkle said. “We came out in the second half and again some of our guys didn’t have that urgency that we needed to have.”

Tinkle lamented that his Beavers weren’t physical enough to match the Ducks, and certainly this was a different Oregon team inside from the previous meeting. The Ducks welcomed back 6-foot-11 N’faly Dante after he missed the previous nine games with knee tendinitis, and also available for this game was 6-9 Francis Okoro, who didn’t play at OSU while attending his father’s funeral in Nigeria. Okoro had a team-high six rebounds while Dante added two in five minutes, and his height seemed to impact OSU’s inside shooting.

“Coach was all about me coming in to try and play more physical,” Okoro said.

Richardson and Pritchard combined for 28 of Oregon’s 40 points after the break. Anthony Mathis finished with 13. Those three Ducks were a combined 11 of 21 on 3-pointers.

“They hit some backbreaker 3s, give them credit for that,” Tinkle said

Thompson had only two points in the second half as Oregon concentrated its defense on him.

“Ethan put it on us in the first half and we made the call to start doubling him on ball screens and that helped us out in the second half,” Altman said. “We got the ball out of his hands a bit.”

Oregon led 29-25 at halftime after both teams struggled shooting. The Ducks shot 36% in the first half despite making five of 11 3-pointers, while the Beavers were at 38%.

Mathis led the Ducks with 11 points, including three 3-pointers. He was back in the starting lineup with Chris Duarte out after undergoing a surgical procedure earlier in the day for a broken finger sustained almost a month ago.

Oregon scored the first five points of the second half for its biggest lead to that point at 34-25. The lead was 10 when the Ducks went on a 9-0 spurt, aided by three OSU turnovers in a span of four possessions, for a 45-28 advantage seven minutes into the second half.

Pritchard and Richardson hit 3-pointers on consecutive Oregon possessions as the lead reached 51-29. The Beavers never got closer than the final score.

“We were playing defense with our hands down, so it made their shots a lot easier,” Tres Tinkle said. “We didn’t take it to heart to stop it.

“It was a comedy of things. We didn’t have people ready for a game like this.”

Oregon State: The Beavers won the previous three meetings, including a 63-53 victory earlier this month.

This was the 354th meeting between Oregon and Oregon State, making it the most-played series in the NCAA. Oregon State leads 190-163.

Duarte, Oregon’s second-leading scorer (12.9 points per game) and rebounder (5.6 per game), was held out after undergoing a surgical procedure on a broken finger on his right hand. ... Oregon State junior Payton Dastrup was suspended for the game for a violation of team rules. He is averaging 2.0 points and 1.3 rebounds per game.

Oregon State: Plays at home against Stanford next Thursday.

Oregon: Plays at home against California next Thursday.