No. 18 Missouri holds off second-half surge to beat Kentucky 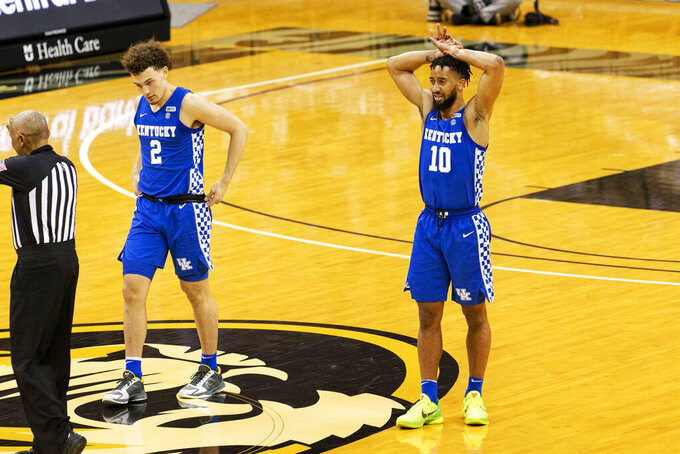 Kentucky's Davion Mintz, right, and Devin Askew, left, react after a foul called in the final minute of their 75-70 loss to Missouri in an NCAA college basketball game Wednesday, Feb. 3, 2021, in Columbia, Mo. (AP Photo/L.G. Patterson) 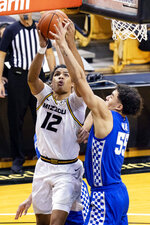 Smith also had seven rebounds and five assists to go along with 6-for-11 shooting. The senior went 12 of 14 from the free throw line, knocking down numerous key foul shots late to help the Tigers (12-3, 5-3 Southeastern Conference) hold on.

“He’s an experienced guard who’s battle tested,” Missouri coach Cuonzo Martin said. “He plays on both ends, he competes, he gets rebounds."

Down 40-27 at halftime, Kentucky went on a 15-3 run to start the second half and cut Missouri’s lead to one. But the Wildcats (5-11, 4-5) never got the lead, hurt by a scoring drought of more than three minutes, and couldn't rally after being down by four with the ball and 1:15 left.

“I just ran with the guys that were playing,” Calipari said. “If you watch what they were doing to Dontaie, they were going right at him defensively. Our biggest thing was that we were getting great stops and scoring so, you know, next game we may play him 25, 30 minutes. This game, it was my choice.”

In a foul-filled second half where both teams were in the bonus with 11:28 remaining, numerous players dealt with foul trouble late into the game. Kentucky big man Olivier Sarr fouled out with 5:32 to play while Boston did so with 1:01 left. Three other players (Kentucky’s Devin Askew and Lance Ware, Missouri’s Kobe Brown) were saddled with four fouls.

Missouri forward Jeremiah Tilmon, who had 33 points and 11 rebounds against TCU on Saturday, was often double-teamed down low and held to eight points and five boards. But the focus on Tilmon inside opened things up for the Tigers' backcourt to attack the rim for layups or kick it out to the wing for 3s.

“We've seen how (Tilmon's) been playing, they were sending two at him every time,” Dru Smith said. “A couple of times, it looked like he had three or four guys guarding him. I think just even giving a look into the post was getting guys open shots there, especially early.”

Missouri won its fifth game in sixth tries, while Kentucky has lost five of its last six. The game was held a day after its previously scheduled date due to COVID-19 protocols in the Wildcats’ program, issues that forced the cancellation of their slated SEC/Big 12 Challenge game against Texas on Saturday.

Freshman guard Cam’Ron Fletcher — a St. Louis native — played in his home state for his first appearance since being suspended by Calipari following an emotional outburst on the bench in a loss to North Carolina on Dec. 19. His shift was brief; Fletcher played just a single minute and recorded no stats.

Missouri: Notched only its second win over the Wildcats, with the only other victory coming Feb. 3, 2018. The Tigers also improved to 7-1 this season when Dru Smith and Pinson each reach double figures in scoring.

Kentucky: Having dropped to 4-5 in SEC play, the Wildcats now have a losing conference record for the first time since February 2018.