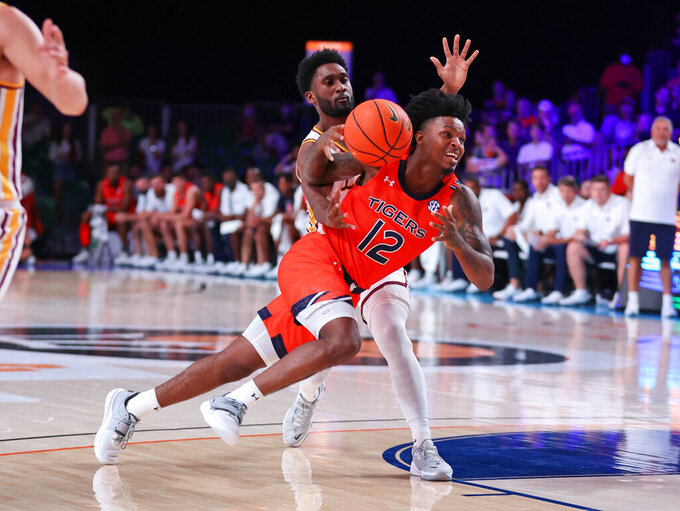 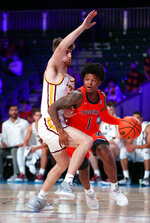 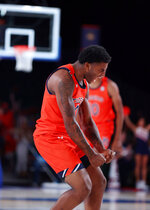 PARADISE ISLAND, Bahamas (AP) — Jabari Smith looked comfortable posting up for No. 19 Auburn, while Walker Kessler kept working the glass and protecting the rim against an opponent that reached the second weekend of last season's NCAA Tournament.

It's a good, early sign for Bruce Pearl's young frontcourt.

Smith had 14 points and Kessler had his second straight double-double at the Battle 4 Atlantis, helping the Tigers regroup from a double-overtime loss and beat Loyola Chicago 62-53 in Thursday's consolation round.

Smith, a 6-foot-10 forward, made 7 of 9 shots for the game. That included some back-to-the basket work and turning around to shoot over a defender, something the top recruit and NBA prospect showed fluidity in doing. He made a couple of key baskets in the final minutes: a turnaround in the lane over a defender near the 5-minute mark and then a turnaround shot over Lucas Williamson for a 58-51 lead with 2:27 left.

Kessler added 13 points, 10 rebounds and four blocks for the Tigers (4-1), who held the Ramblers to just two field goals over an 11-minute span in the second half. That helped the Tigers stretch out to a 10-point margin heading into the final minutes of a cold-shooting second half for the Ramblers (4-2).

Marquise Kennedy scored 13 points to lead the Ramblers (4-2), who shot 62% in the first half. But Loyola Chicago’s offense struggled to string together baskets to build some rhythm, and the outside-shooting struggles after halftime were magnified as Auburn began to increase its late margin.

Auburn: The Tigers were coming off a wild 115-109 loss to No. 22 UConn in Wednesday's first round. They had to get ready less than 24 hours later for this one against a team that reached the NCAA Sweet 16 last year. But Auburn played from in front for the final 16 minutes and remained in control of the first-ever meeting between the schools.

Loyola Chicago: The Ramblers lost their first-round game to Michigan State on a last-second alley-oop dunk. They responded with a strong offensive first half against Auburn, but didn't connect on a 3 in the second half until Kennedy with 2:49 left, when they were down eight.

Loyola Chicago made 6 of 13 3-pointers in the first half, with three coming from Braden Norris. But those shots weren't falling after halftime, with the Ramblers missing their first seven attempts and going 1 for 10.

“I thought we took some bad ones,” first-year coach Drew Valentine said. "I thought we assisted them. Obviously they're an extremely athletic team that does a good job of pressuring the ball and speeding you up.

Loyola Chicago: The Ramblers will play in Friday's seventh-place game against Arizona State.