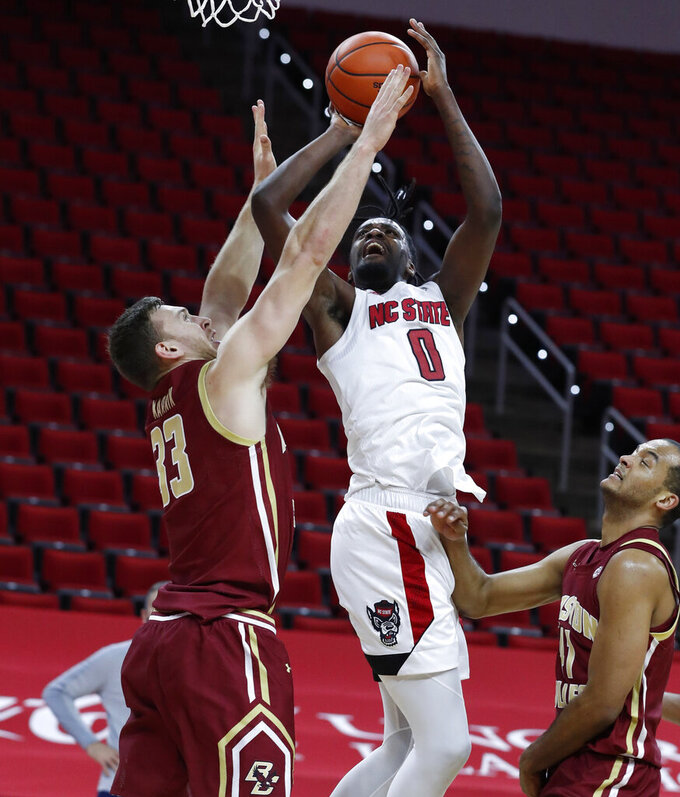 No. 19 Clemson (9-1, 3-1 ACC) at North Carolina (7-4, 2-2). Forget that the Tigers are ranked and the Tar Heels aren't, something that doesn't happen too often when the teams meet. Or that Clemson leads the ACC in fewest points allowed or rallied late to win its past three ACC games against Florida State, Miami and North Carolina State. The Tigers can earn their first-ever winning streak in Chapel Hill. Clemson had one of the more stunning victories of last ACC season when it came from behind to win at North Carolina 79-76 in overtime and end what had been the Tigers 0-59 mark all-time there. Now, the teams play the first of two regular-season games this season at the Smith Center for the second straight time. The Tar Heels have won their past two games this season, beating Notre Dame 66-65 on Jan. 2 and at Miami 67-65 on Tuesday night.

The coronavirus has caused changes in the ACC's schedule once more. Georgia Tech had to shutdown its men's program and postpone games at Notre Dame on Wednesday night and at Louisville on Saturday. Duke coach Mike Krzyzewski is in quarantine with his wife after both were exposed to a family member who tested positive for COVID-19. He missed the 21st-ranked Blue Devils' win over Boston College on Wednesday and could miss Saturday's home game with Wake Forest.

North Carolina State's DJ Funderburk has fit right back into the lineup after missing three games with an injury. He scored 21 points in the Wolfpack's win over Boston College on Dec. 30 and went for 20 points and seven rebounds in a 74-70 overtime loss at Clemson this past Tuesday. The 6-foot-10 senior from Cleveland has also been clutch when it counts, making 19 of 21 foul shots this season including going 9-of-9 at the line against the Tigers.

From Dec. 29 through Jan. 5, nine of the 11 ACC games have been determined by 10 points or fewer. Five of those have come by one possession. ... Georgia Tech senior Jose Alvarado averaged 22.5 points and 4.5 assists in wins last week over North Carolina (72-67) and Wake Forest (70-54). Alvarado made 17 of 24 field goals in the two games and was named the ACC player of the week for his performance.

The ACC continues to be hit hard by coronavirus-related issues. The league's top two women's teams in No. 2 Louisville and North Carolina State, tied for third in the rankings with UConn, have had their schedules altered by COVID-19. The Cardinals were supposed to play Pittsburgh on Thursday night, but the opponent changed to Virginia Tech due to the virus. The Wolfpack, 10-0 overall and 5-0 in the ACC, postponed two games this week after positive tests, quarantining and contact tracing. North Carolina State next play against Virginia on Jan. 14.