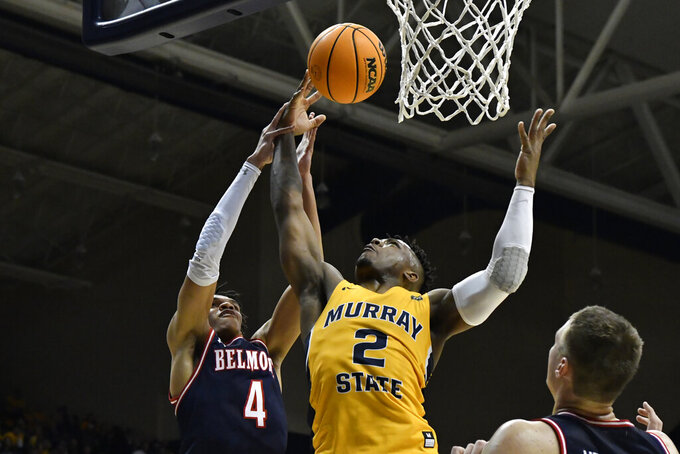 MURRAY, Ky. (AP) — Forward KJ Williams had 30 points on 12-for-19 shooting and added five rebounds, and No. 19 Murray State claimed the Ohio Valley Conference regular-season title with a 76-43 win over Belmont on Thursday night.

“We’re just going to do what we do,” McMahon said. “It wasn’t a high offensive rebounding game for either team. But we were able to, I thought, force a lot of contested shots late in the clock. I thought we were very active and aggressive defensively, and we were able to convert that in some transition.

“The 19-0 (fastbreak points advantage) is a very telling stat. They’re one of the best transition teams in all of college basketball. Ben Sheppard is probably the fastest guard in America, running the wing and attacking the basket. So I think that always has to be an emphasis when you play an offense that averages 81 points a game. To get back, and try to get your defense set. To hold them to 43, a team that averages 81, is really a credit to our players and their defensive effort — but also their attention to detail and focus.”

In the final regular-season meeting before both teams join the Missouri Valley Conference this summer, Williams was one of nine Racers to score.

Freshman Will Richard was the only Belmont player to reach double figures, scoring 10 points on 4-for-11 shooting with two 3-pointers. Grayson Murphy, Ben Sheppard and Nick Muszynski each had eight points.

Brown and Williams combined to score the Racers’ first 18 points and Murray State jumped out to a 20-13 lead.

“It’s kind of who they are,” McMahon added. “They perform at that level every night. That’s why they’re so good. They did a good job adjusting to the zone Belmont started out in. Thought our guys did a good job finding Tevin, and he shot the ball with great confidence. KJ did as well from three.

“Then (KJ) really did a good job sometimes against the zone. For example, on Saturday (against UT Martin), we struggled to score from two-point range against Martin’s zone that was really packed in and tight. We shot 34% from two there, which is pathetic. And tonight, I thought we still got the ball inside to KJ against the zone, and he was able to score it. Put some more pressure on the zone, and did a much better job attacking that we did on Saturday (against Martin).”

Belmont closed within three points before the Racers closed the first half on a 19-4 run for a 35-17 halftime lead.

Murray State’s defense held the Bruins to 7-for-27 shooting from the field and 1 for 12 from long distance in the first half.

That defensive effort continued into the second half, as the Racers stretched their lead to 66-33.

Murray State won second-chance points 11-4, points off turnovers 15-8 and finished with 17 assists on 31 made baskets.

Murray State: The Racers pick up a quality Quad 1 win for their NET standings, and stayed within the Top 25 of KenPom rankings. A conference tournament championship is the goal, but the resume remains strong for an at-large bid into the NCAA Tournament.

Belmont: The Bruins scored their fewest points of this season. Their previous low was 53 points in a Nov. 22, 2021, loss at LSU.