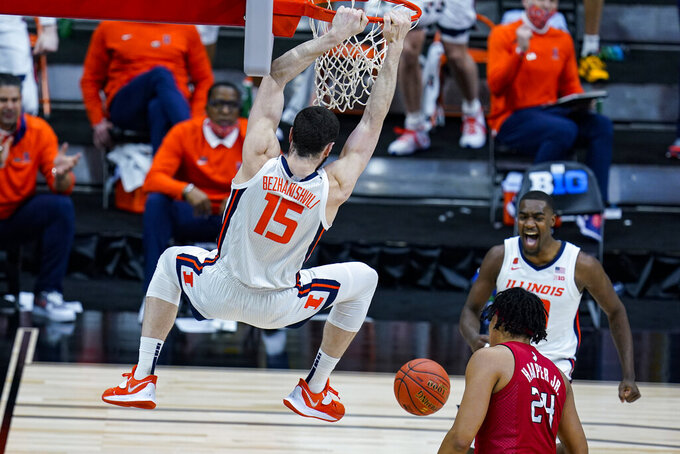 INDIANAPOLIS (AP) — Ayo Dosunmu is convinced tournament time requires a sense of urgency. He was quick to demonstrate that against Rutgers.

The junior guard scored 14 of his 23 points in the first half as No. 3 Illinois built a 19-point lead on the way to a 90-68 rout of the Scarlet Knights in the quarterfinals of the Big Ten Tournament on Friday night.

“I just wanted to come out and give it all I had,” Dosunmu said. “Tomorrow isn't promised.”

Illinois advanced in part because Dosunmu shot 8 of 11 from the field, 7 of 9 from the line and added six assists and five rebounds. Second-seeded Illinois (21-6) avenged a regular-season loss to Rutgers (15-11) to advance to Saturday’s semifinals against No. 5 Iowa, a 62-57 winner over Wisconsin.

“Offensively, Ayo got us off to a strong start,” Illini coach Brad Underwood said.

This game was a reversal of a 91-88 loss at Rutgers on Dec. 20. In that game, Illinois was outrebounded and failed to prevent the Scarlet Knights from getting out in transition and earning trips to the foul line. This time, Illinois dominated the boards 44-19, including 17-3 in offensive rebounds.

Center Kofi Cockburn threw around his 7-foot, 285-pound frame, and had four emphatic dunks. He finished with 18 points and 12 rebounds.

“Our guys were dialed in,” Underwood said.

When not hitting shots, the Illini forced the action with drives to the rim and getting fouled. Illinois made 21 of 31 free throws. Seventh-seeded Rutgers converted 16 of 22. Illinois also had a 12-9 edge in transition scoring.

“In the postseason, it's definitely good to get off to a strong start,” Dosunmu said. “We were able to set a tone.”

Rutgers reduced a 19-point halftime deficit to 13 early in the second half, but got no closer.

Ron Harper Jr. scored 21 points and Jacob Young had 13 for the Scarlet Knights.

Rutgers coach Steve Pikiell still holds out hope that his team will get a chance to keep playing, in the NCAA Tournament or NIT.

“I like this team a lot,” Pikiell said. “We don't want to put our uniforms up. We can do some exciting things.”

The Illini scored the first nine points. Rutgers closed within four points before Illinois pulled away. Cockburn punctuated the early effort with a one-handed dunk off an offensive rebound for a 45-26 lead in the final minute of the first half.

Rutgers: The Scarlet Knights were ranked as high as 11th during the regular season, but injuries took a toll. A modestly successful season after 20 wins the year before was a letdown without an NCAA Tournament bid. Perhaps the NIT will provide a chance to keep playing.

Illinois: The last time the Illini were as high as a second seed was in 2009, when they were also a No. 2. A tourney title could legitimize the team as a No. 1 seed in the NCAA Tournament. ... Sixteen conference wins in the regular season were the most in team history.

Illinois: Versus Iowa in tourney semifinals on Saturday.