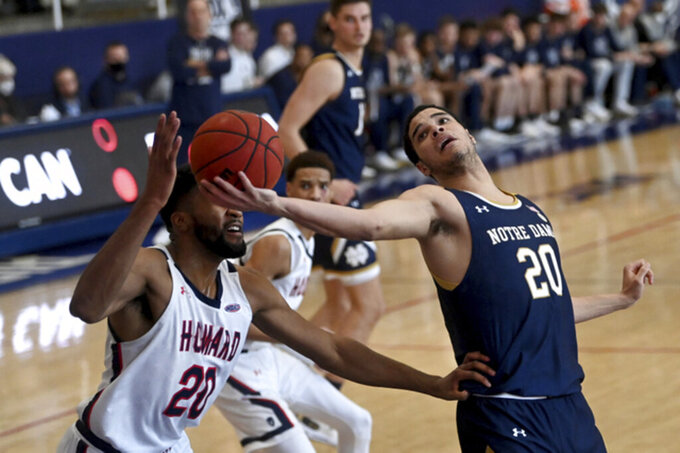 Notre Dame led 67-56 before turning it over four times in five possessions, while Howard scored 10 straight. Cormac Ryan ended the Irish’s drought with two free throws with 41.5 seconds left for a three-point lead.

Elijah Hawkins converted a layup in traffic to pull Howard within 69-68, but Prentiss Hubb answered at the other end on a driving layup with 12.7 left. Hawkins had a chance to tie it but his step-back 3-pointer hit the back of the iron as time expired.

Blake Wesley added 13 points and Paul Atkinson had eight rebounds for Notre Dame (11-6), which returns to ACC play on Saturday at Louisville. Wesley set a program record for most double digit scoring games from a true freshman in a season with 14, passing Troy Murphy.

Steve Settle III, averaging 13.5 points per game, scored a career-high 25 points for the Bison (6-8). Kyle Foster and Hawkins each had 12 points.

It marked Notre Dame’s first road game at a Historically Black College or University — made possible by the coaching connection. Howard coach Kenny Blakeney played for Notre Dame coach Mike Brey at Duke (1992-95) while Brey was an assistant with the Blue Devils and was an assistant coach under Brey at Delaware (2002-05).