Notre Dame's Blake Wesley making a name for himself 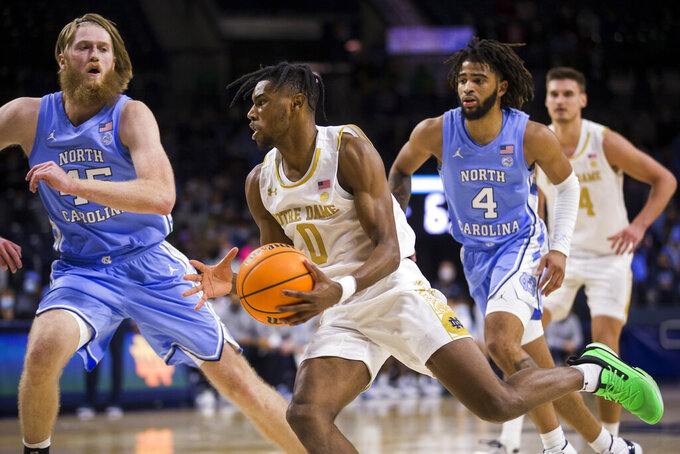 Blake Wesley arrived at Notre Dame without some of the same fanfare as other incoming freshmen. The accolades went to players like Gonzaga's Chet Holmgren, Duke's Paolo Banchero and Auburn's Jabari Smith.

An explosive start to his freshman season has put Wesley in the conversation about college basketball's best players and, possibly, put him in position to become the first one-and-done player at Notre Dame.

“He’s very special,” Notre Dame coach Mike Brey said. “We've just got to keep grooming him and how to play around him and off of him.”

A lanky 6-foot-5 guard, Wesley stayed in South Bend after starring at Riley High School, where he averaged 27.1 points as a senior. He was ranked No. 111 nationally in the 247Sports composite and opened his Notre Dame career with 21 points against Cal State Northridge.

Wesley has flourished since becoming a starter seven games into the season, averaging 14.3 points — second on the team — 3.1 rebounds and 2.1 assists per game. He's proven to be an explosive finisher at the rim and has not shied away from challenges, scoring 24 points in front of 14,000 opposing fans at Illinois.

“He’s very fortunate that he plays with some senior guards that allow him and know, you’ve got the ball, go make plays for us,” Brey said.

STRENGTHS: Exceptional athlete who can beat defenders off the dribble and is an explosive finisher at the rim. A good perimeter shooter who's also comfortable bringing the ball up as the point guard.

WEAKNESSES: Needs to put on weight. Slight frame could make it difficult for him to fight through contact at the next level. Has good shooting form, but hitting just 69% of his free throws so far this season.

DRAFT PROJECTION: Mid first round if he comes out this year, potential lottery pick if he stays another year.

Other NBA prospects to watch in the ACC:

TREVOR KEELS: The Duke freshman has a solid frame at 6-5, 221 pounds and scored 25 points against Kentucky in his first college game. He's averaging 11.9 points, but suffered a right knee injury against Florida State on Tuesday.

DAWSON GARCIA: The North Carolina sophomore big man is a solid shooter and rebounder who plays hard. The 6-11 forward scored 26 points against Purdue this season and is averaging 9.1 points and 5.5 rebounds.

JAKE LARAVIA: The 6-8 junior at Wake Forest is shooting 60% from the floor while averaging 14.8 points and 6.0 rebounds per game. LaRavia is a good shooter, is excellent coming off screens and comfortable bringing the ball up the floor.