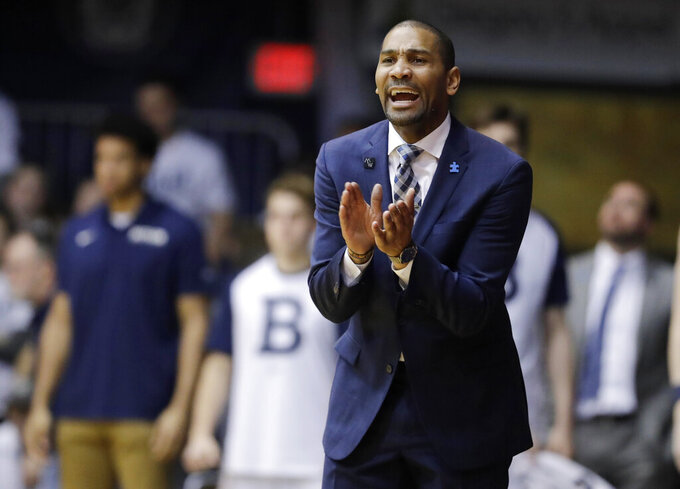 FILE - In this Feb. 16, 2019, file photo, Butler coach LaVall Jordan encourages his team during the second half of an NCAA college basketball game against DePaul in Indianapolis. Much like what’s happened at other small-school programs such as Butler and Xavier, Gonzaga’s trajectory isn’t lost on Buffalo coach Nate Oats, who has wondered whether the same can't one day be realized at Buffalo. (AP Photo/Darron Cummings, File)

AMHERST, N.Y. (AP) — Buffalo coach Nate Oats was so caught up in the possibility of facing his former boss in the first round of the NCAA Tournament, the significance of the West Region's top-seeded team initially escaped him on Selection Sunday.

"You know, I didn't even think about that," Oats said when reminded his Mid-American Conference Bulls were placed in the same bracket as Gonzaga. "My wife's always said I need to call Mark Few and talk to him."

Why wait, when there's the off-chance for the two coaches to trade notes should their teams meet in the Elite Eight.

Few is Gonzaga's coach who has spent the past 20 years shedding the Bulldogs' "mid-major" label by transforming them into a national power. Much like what's happened at other small-school programs such as Butler and Xavier, Oats wonders if the same could happen at Buffalo.

"We're getting to where I don't know if you'd call us a mid-plus," Oats said.

"In order to get out of that quote-unquote mid-major category, my personal opinion is you need to repeat it a little more frequently," he added. "We're not there yet. But we're climbing in the right direction for sure."

The sixth-seeded Bulls open the tournament Friday at Tulsa, Oklahoma, where they'll face the winner of a play-in game between St. John's and Arizona State, headed by former Buffalo coach Bobby Hurley.

That's when No. 15 Buffalo can continue placing its stamp on the national landscape with its fourth tournament appearance in five years and coming off a 31-3 season in which it set a MAC record for single-season victories.

The senior-laden Bulls returned all but one starter from the 13th-seeded team that turned heads a year ago with a tournament-opening 89-68 romp over Arizona before a second-round loss to Kentucky. And they spent this season with an objective of making it to the tournament's second weekend, which would mean a spot in the Sweet 16.

Then again, why stop there, as senior guard CJ Massinburg noted by saying: "You're right. We want to take it all the way, baby."

The Bulls have adopted the swagger often displayed by their coach, who laughed when asked if he's ever taken his motivational foot off the gas.

"Yeah, we don't do that often around here," Oats said.

So much for the notion you can't build a winner in Buffalo, a state school that struggled through the growing pains after making the jump to the Division I level in 1998.

The transformation began in 2013 when Hurley was hired and led the Bulls to their first tournament appearance in 2015 before bolting for Arizona State. Oats, Hurley's top recruiter, was promoted to take over, even though he was two years removed from coaching high school in suburban Detroit.

Oats proceeded to lead Buffalo to its second consecutive tournament appearance despite dealing with the personal concerns of his wife being diagnosed with cancer, and having his best player, Justin Moss, expelled after being arrested for robbery.

After missing the tournament in 2017, Buffalo has gone a combined 58-12 since. The Bulls are just one of 27 schools to have reached the tournament in at least four of the past five years, joining a group that includes Duke, Kentucky, Gonzaga and Butler.

Butler coach LaVall Jordan has known Oats since his high school-coaching days, and sees parallels in the Bulls' approach to building a sustained winner.

"That's what they have in that league just like we had in the Horizon, we always thought we were supposed to win it," Jordan said. "When they walk on the court, they're not afraid of anyone."

Butler athletic director and former coach Barry Collier is fully aware of what Buffalo has done, and said the key to building and sustaining success is having a single vision between the athletic department and school administration.

"What I think people don't realize is this has been a 20 to 22-year run. It just didn't happen," Collier said. "I was here seven or eight years before we really broke through. And I think what it really takes is an alignment between the administration, including the athletic director and the coaches about what they want to do and then going out there and actually getting it done."

In Buffalo, Oats has the school's backing. Last week, he signed a five-year contract extension that will pay him $837,000 a year, making him the conference's top-paid coach.

"Obviously, (Oats) knows that we're committed to building this program," Buffalo athletic director Mark Alnutt said. "For us, you see the parallels that Mark Few's done at Gonzaga in terms of building it into a mainstay. From a basketball standpoint, I feel like we're right there."

"What really elevates you is a program that goes and really starts to raise the bar and tries to separate themselves from everybody else. And the Buffalo men are clearly raising the bar right now," MAC Commissioner Jon Steinbrecher said. "Take knocking off the PAC 12 champion (Arizona) last year and then coming into this year and, out of the gate, you knock off a 14th-ranked West Virginia and Syracuse. Boom. It just starts to multiply."

The Bulls have become so good, Oats pondered the notion earlier this year of whether the time might come when Buffalo won't be considered an underdog.

"Even if we were a higher seed in the NCAA Tournament, I still think people would think we'd be the underdog this year," Oats said in January. "But after this, I don't know."

AP Sports Writers Mike Marot in Indianapolis, and Tom Withers in Cleveland contributed to this report.