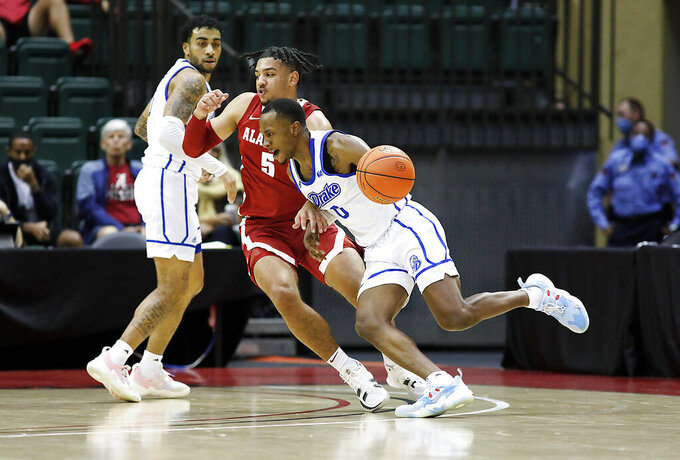 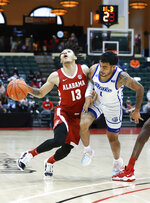 LAKE BUENA VISTA, Fla. (AP) — Jahvon Quinerly scored 18 points, Jaden Shackelford and Juwan Gary each had 14, and No. 10 Alabama beat Drake 80-71 in the consolation round of the ESPN Events Invitational on Friday.

Gary added 10 rebounds for Alabama (5-1), which was shocked 72-68 by coach Rick Pitino's Iona team in its tournament opener.

“To bounce back after a loss like yesterday, a disappointing loss, we were upset,” Oats said. “I thought we played very hard.”

“I told the guys I was proud of their fight,” Drake coach Darian DeVries said. “Can't be disappointed in what our guys were trying to do and their effort.”

Shackelford hit his first field goal of the second half with 3 minutes remaining. After Quinerly connected on a 3, Shackelford made a jumper to give Alabama a 74-64 advantage one minute later.

“I told our team, maybe, that was the play of the game when he drove, collapsed three guys in transition instead of the shooting the shot,” Oats said. “He's wired to score, that's what makes him so good, but I thought he made the right plays today.”

“Today was a big emphasis of just getting the ball moved, making a good read, getting it to the right person,” Gary said. “Just playing our game.”

The first half saw both teams put together impressive scoring surges.

Drake then closed out the opening 20 minutes with 11 straight points, including a buzzer-beating 3 from Hemphill to get within 33-29.

Alabama: Has had a disappointing start to the tournament even with the victory and has voters pondering how far to drop it in next week's poll.

Drake: Lost its first-round game to Belmont, 74-69, on Thursday. The Bulldogs made their fifth NCAA Tournament appearance last season and got their first tourney win in 50 years, 53-52 over Wichita State.

Drake: Closes out the tourney against North Texas in the seventh-place game Sunday.