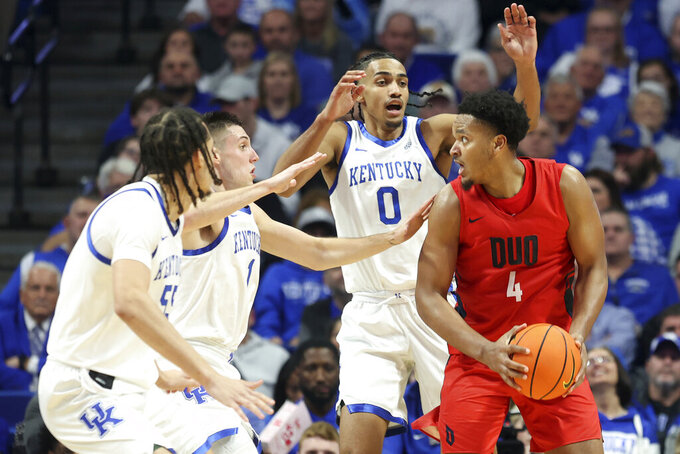 Duquesne's Tre Williams (4) is pressured by, from left to right, Kentucky's Lance Ware, CJ Fredrick, and Jacob Toppin during the second half of an NCAA college basketball game in Lexington, Ky., Friday, Nov. 11, 2022. (AP Photo/James Crisp)

The Wildcats (2-0) played their second consecutive game without Oscar Tshiebwe, last year's consensus national player of the year, who's recovering from a procedure on his right knee last month. Coach John Calipari said after the game that Tshiebwe was ahead of schedule but it wasn't clear whether he would be available Tuesday night against Michigan State in Indianapolis.

Daimion Collins also missed his second consecutive game because of the recent death of his father in Texas. The Wildcats welcomed back point guard Sahvir Wheeler from a right leg injury, and the senior had 11 points, 11 assists and six rebounds in 27 minutes, helping Kentucky's fast pace against the Dukes (1-1).

“Sahvir did good,” Calipari said. “He played more minutes than I wanted to play him, but I think our guards are going to play 20 to 25, 27 minutes, depending on who plays well.”

Reeves and Fredrick again set the tone with impressive perimeter shooting to follow up their debuts on Monday night against Howard, when Reeves scored 22 points and Fredrick had 20.

Reeves and Fredrick each shot 5 of 9 from the field against Duquesne. Reeves made 4 of 6 from long range while Fredrick was 4 of 7 as Kentucky finished 11 of 19 from behind the arc.

“We have a lot of guys making shots right now,” Jacob Toppin said.

Ugonna Onyenso added nine points, while Toppin and Cason Wallace each had eight. All eight Kentucky players scored at least four points. Onyenso had 10 rebounds as the Wildcats won on the glass 46-35.

Jimmy Clark III scored 11 points and Austin Rotroff had eight for Duquesne, which was coming off a 91-63 home win over Montana. The Dukes shot 30%, improving from a 24% first half.

After shooting 50% to lead 38-22 at halftime, Kentucky started the second half cold. Duquesne took advantage to get within 38-29 before the Wildcats mounted several small runs, including eight unanswered points over 1:20 for a 53-35 lead. They weren’t seriously threatened again.

Michael McGuire, who got attention for attending Kentucky’s Blue-White scrimmage with his family while covered in coal dust fresh off a shift in an eastern Kentucky mine, entered the court during a second-half timeout to spell out the “Y” in Kentucky.

Calipari posted a tweet that went viral about McGuire’s presence at last month’s benefit game for victims of this summer’s floods in the region. The two met soon after with Calipari pledging to do something special, noting his grandfather was a miner.

Duquesne: The Dukes are breaking in 10 first-year players, and the growing pains showed when it came to scoring. They twice missed eight consecutive shots and had another stretch of six misses.

Kentucky: The backcourt continued its strong play with Wheeler complementing Reeves and Fredrick. Cason Wallace added eight points and four assists. Everybody got a chance to contribute, especially the 6-11 Onyenso, a late signee who made 4 of 7 from the field. That kind of balance should make Calipari even happier.

Kentucky faces Michigan State on Tuesday night at the Champions Classic in Indianapolis.