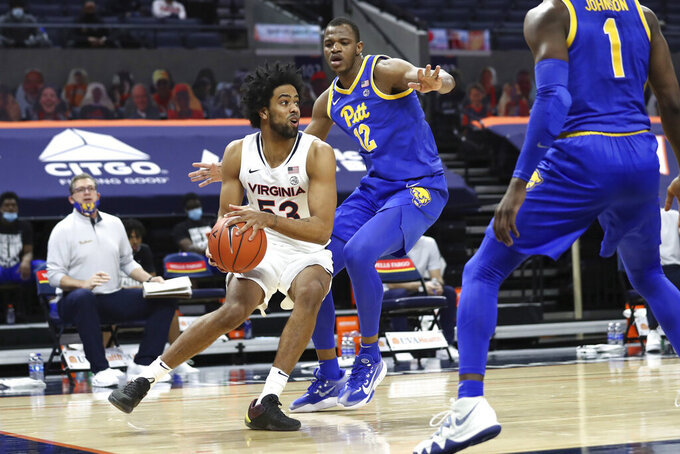 Sam Hauser scored 10 of his 23 points during a key second-half stretch, and No. 14 Virginia pulled away from Pittsburgh for a 73-65 victory on Saturday.

Woldetensae had 14 points and Huff finished with 13 points and eight rebounds. Virginia has won nine of its last 10, all against ACC competition.

“I don’t think we won it with our defense, today, or even our soundness,” a disappointed Cavaliers coach Tony Bennett said.

“We’ve got to find find different ways to win, but we’ve got to shore up those areas.”

The game was tied at 36 after the Panthers scored five straight points, the last on a basket by Au’Diese Toney with 16:21 left, but two free throws by Hauser launched Virginia’s big run. Huff followed with a pair of 3-pointers and, after Woldetensae hit a pair of free throws, Hauser added a pair of 3s and Woldetensae, a streaky left-handed shooter who hadn’t scored in limited action in four games for the ACC leaders, added two more.

“I thought we came out ready to play,” Panthers coach Jeff Capel said. “I thought we played well except for that little stretch in the second half from about the under 16 timeout (until) about the seven-, eight-minute mark, and we dug too deep of a hole.”

The Panthers closed to 64-57 with 2:43 left, and the Cavaliers, one of the nation’s top free-throw shooting teams, missed three of the next four from the line, but Pittsburgh ran out of time. Two free throws by Trey Murphy III sealed it.

Pittsburgh: Champagnie had a nice day, but Toney was limited to just eight points on 4-for-6 shooting.

Virginia: When Hauser is hitting catch-and-release 3s and with the Cavaliers’ defense steadily improving, Virginia is rounding into the type of team that has been hard to beat.

Pittsburgh is scheduled to visit Louisville on Wednesday night.

Virginia is scheduled to visit Georgia Tech on Wednesday night.