Seniors play key role in putting No. 19 Buffalo on the map 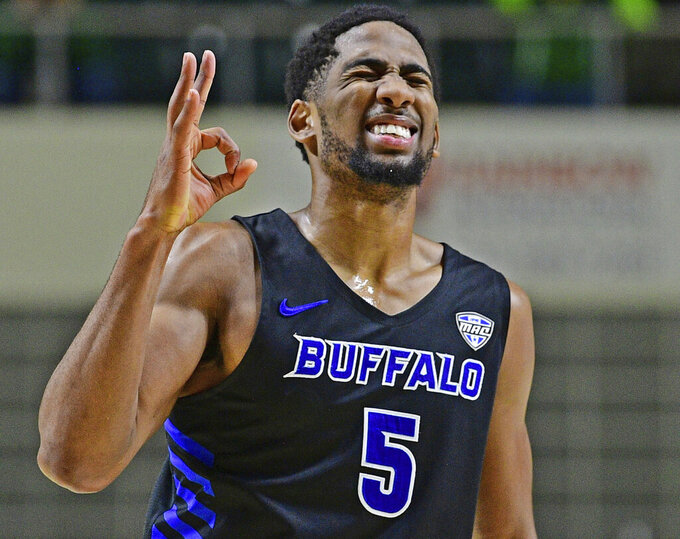 FILE - In this Tuesday, March 5, 2019, file photo, Buffalo guard CJ Massinburg reacts after making a 3-point shot during the second half of an NCAA college basketball game against Ohio in Athens, Ohio. On Friday, Massinburg will join four fellow seniors in playing their final home game, while appreciating how he played a significant role in spending the past four years placing Buffalo firmly on the map. (AP Photo/David Dermer, File)

AMHERST, N.Y. (AP) — Growing up in Dallas, CJ Massinburg never heard of Buffalo, never mind knew it featured a college with a Division I basketball program.

"I didn't even know what or where Buffalo was, to be honest," the Bulls senior guard recalled with a chuckle this week. "Before I took my visit, I told everybody, 'Hey, I'm going to take a visit to Buffalo.' And all my friends were like, 'What's that? Where's that?'"

On Friday, Massinburg will join four fellow seniors in playing their final home game, while appreciating how he played a significant role in spending the past four years placing Buffalo firmly on the map.

"Man, as I look back at my college career, that's one thing I'll be most proud of," Massinburg said.

He and the No. 19 Mid-American Conference Bulls (27-3, 15-2) have an opportunity to further broaden the mid-major's stamp on the national basketball landscape before the year is out.

Massinburg is part of a team that's already matched last season's school-record win total, which included a first-round tournament victory over Arizona. Buffalo's been a fixture in the national rankings for 18 consecutive weeks — a MAC record. The Bulls, who count wins over Syracuse, West Virginia and San Francisco, are already in position to have clinched their fourth NCAA Tournament berth in five years no matter how they fair in the conference tournament in Cleveland next week.

And in closing the regular season against Bowling Green (20-10, 12-5) on Friday night, Buffalo has already clinched first place and has a chance to win its 26th consecutive home game and match the nation's longest active streak held by No. 5 Tennessee.

One step at a time, Massinburg said in trying to put aside the distractions of Senior Night, and playing before family, friends and a sellout crowd.

"I'm kind of trying to stay in the moment," Massinburg said, while noting Buffalo's last loss was at Bowling Green on Feb. 1. "Beating Bowling Green is everything."

Coach Nate Oats acknowledged he might have difficulty of containing his emotions.

"I don't cry very often, but I might, when I think about all that stuff that they've done," he said, referring to his five seniors. "You can probably talk five minutes on each kid, but I'll have to condense it to a couple of minutes on the five so we can get everybody out of here at a decent time."

No one, including himself, anticipated this season's success.

"Nobody thought it could be like this," Oats said. "And those guys believed. Those guys turned it this way. So Friday night's going to be special."

Massinburg and forward Nick Perkins have played all four seasons at Buffalo. Senior guard and defensive specialist Dontay Caruthers has spent three years with the Bulls, while senior wingmen Jeremy Harris and Montell McRae are completing their second seasons as junior college transfers. Perkins and Caruthers come off the bench, while the Bulls starters are rounded out by guards, Davonta Jordan, a junior, and sophomore Jayvon Graves.

Together, they've adopted Oats' relentless, high-tempo approach that keys off a smothering defense and translates to scoring chances in transition.

It's a style that's provided the Bulls the ability to blow out teams, as they did in a 114-67 win over Ohio three weeks ago. Or they can simply wear down opponents, as happened two weeks ago when Buffalo out-scored Akron 14-2 over the final four minutes of a 77-64 win in a game that featured 12 lead changes.

Oats is hardly satisfied, and perturbed over how the Bulls struggled on defense in their last outing, an 82-79 win at Ohio on Tuesday. And he takes no consolation in knowing Buffalo's resume might be good enough to have already locked up a tournament berth.

The objective now is impressing the selection committee to earn as high of a seed as possible. After advancing to the second round last year, Oats is focused on Buffalo reaching the second weekend.

Only 10 MAC teams have advanced to the Sweet 16, with the last being Ohio in 2012. Kent State, in 2002, was the last of only two conference teams to reach the Round of Eight. No MAC school has earned a seed higher than ninth since the tournament expanded to 64 teams in 1985.

This is no time to falter, Massinburg said.

"Our goal is to make it to that second weekend, the Sweet 16, and if we're messing around and get a bad seeding, then we're going to be playing some heavy hitters early," he said.

Asked why stop at the Sweet 16, Massinburg laughed and said: "You're right. We want to take it all the way, baby."