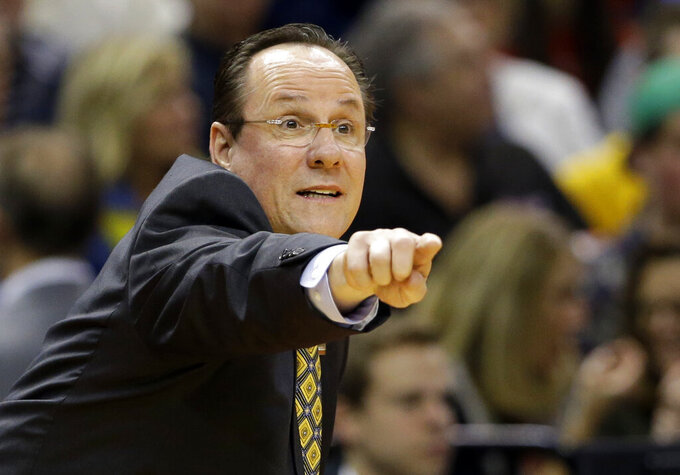 FILE - In this March 17, 2017, file photo, Wichita State head coach Gregg Marshall directs his team against Dayton during the first half of a first-round game in the men's NCAA college basketball tournament in Indianapolis. Under the radar and out of the spotlight, Wichita State has quietly put together a team that could upend all those predictions of a three-way fight for the league title. They won nine of their last 11 games last season, won twice more in the AAC tourney and picked up three more wins in the NIT. (AP Photo/Michael Conroy, File)

WICHITA, Kan. (AP) — All the attention in the American Athletic Conference these days is on Memphis, where new coach Penny Hardaway landed the nation's best recruiting class, along with Houston and Cincinnati.

Kelvin Sampson has made the Cougars into a winner. The Bearcats have a new coach of their own.

But under the radar and out of the spotlight, Wichita State has quietly put together a team that could upend all those predictions of a three-way fight for the league title. They won nine of their last 11 games last season, won twice more in the AAC tourney and picked up three more wins in the NIT.

So while Markis McDuffie and Samajae Haynes-Jones have moved on, the Shockers — who not long ago were the toast of the NCAA Tournament — enter the season with a whole lot of momentum.

"I like this group. They're fun to coach," Shockers coach Gregg Marshall said. "It depends on the day, how we feel when we come out, when it comes to how much we improve. Some days we improve quite a bit and other days not so much."

It's a challenge Marshall welcomes, though.

He took a team that was among the least-experienced in the nation last season, and began 8-11 with plenty of ugly losses, and instilled in it his gritty work ethic and brutal man-to-man defense.

Now, he at least has some veterans to help pass along those lessons.

The sophomore backcourt of Jamarius Burton, Dexter Dennis and Erik Stevenson may be among the most talented and improved in the AAC, and the international inside tandem of Colombia's Jaime Echenique and Denmark's Asbjorn Midtgaard give the Shockers both size and experience.

"Last year was very up-and-down. We got thrown into the fire," Stevenson said. "We got better because of it. It taught us it's going to take more than just playing basketball to win games at this level. We've got to do the little things. What we learned last year is that, even though you might be missing some shots, if you can defend and rebound, you can still win games."

Only if the newcomers are ready to go.

Junior college transfer Trey Wade, who arrived from UTEP via South Plains College, is expected to step into the starting lineup. Tyson Etienne is a high-scoring guard and one of the most touted recruits in Wichita State history, while Grant Sherfield and Noah Fernandes also could crack the rotation.

"We're more hungry this year," said sophomore center Morris Udeze, who is also in line for more playing time. "We've got more depth. Last year we were leaning on Markis and Samajae to lead us and they did. They did a good job leading us. But I feel like this year we are ready to go."

Dennis said one of the biggest differences between last season and this season is that the team is "really, really close." Not that the Shockers weren't last year. There's just a different feeling.

"Our new guys came in with a sense of trying to learn. They don't think they know it all," Dennis said. "I think everyone is listening to Coach well and that's bringing us together."

WHAT'S IN A NAME

If nothing else, the Shockers have some creative names. Burton's nickname is "Grandpa," even though he's just a sophomore, because of his old soul. Then there is sophomore forward Isaiah Poor Bear-Chandler, who is a proud member of the Oklala Lakota tribe of Native Americans.

Among the reasons Wichita State got off to a slow start last season was the time it took such a young group to learn Marshall's intricate motion offense. The experience in the backcourt coupled with more scoring power from his newcomers should speed up that process this season.

"We've got to shoot better, and we will," Marshall vowed, and for good reason. There isn't anywhere to go but up. The Shockers shot 47% from inside the arc last season to rank 302nd nationally, and they were even worse beyond the arc at just 31% (325th).

Wichita State opens the season against Omaha on Nov. 5, but its first real test doesn't come until a trip to the Cancun Challenge for a game against South Carolina. The Shockers also visit Oklahoma State and play Oklahoma at InTrust Bank Arena in downtown Wichita as part of their nonconference slate.