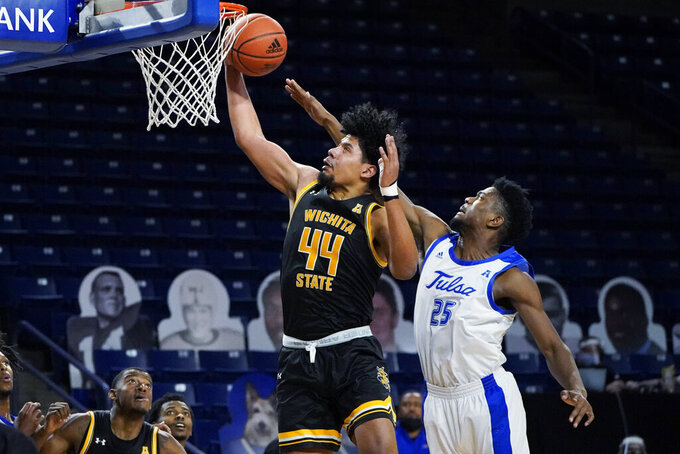 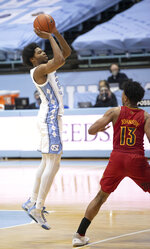 WICHITA, Kan. (AP) — Wichita State headed north to South Dakota to open its season with an interim coach a week on the job, a roster almost completely turned over from last season and almost no expectations when a wave of positive COVID-19 tests forced the Shockers to turn right around and head home.

Turns out it merely delayed the start of a season nobody will soon forget.

Isaac Brown's revamped bunch is not only cruising along at 13-4 and 9-2 in the American Athletic Conference, the Shockers jumped into first place Thursday night with a 68-63 win over sixth-ranked Houston. It was their eighth victory this season by five points or fewer, and their highest-ranked victim at home since beating No. 2 Louisville in 1967.

Suddenly, a program that began the season in turmoil is on the right side of the NCAA Tournament bubble.

“I'm just proud of these guys,” Brown said. “You know, with everything when I first got this job, we told these kids, ‘Just trust us,’ and we're going to give them 110% every day, and all those guys trust the process.

“They just basically stepped up and have just been doing a tremendous job."

Tyson Etienne and Alterique Gilbert scored 16 points apiece in the win over the Cougars, their latest effort in making fans forget all about the seven players that bolted from the program from the end of last season to the beginning of this one.

Just like the rest of the Shockers have made folks forget — at least at some level — about Gregg Marshall, the winningest coach in program history, who agreed to buyout just weeks before the start of the season. It was Marshall who led Wichita State to the Final Four and helped the school gain acceptance from the AAC, but left when former players accused him of physical and verbal abuse going back several years.

Brown, his longtime assistant, has brought a sense of calm and confidence as the interim coach, while former SEC coach Billy Kennedy — brought on to help before the season — has provided another valuable voice in the locker room.

"I was saying it from beginning the game (against Houston): ‘Let’s make history.’ At halftime I was saying, 'Let's make history,' and the guys followed and we did just that. It's an amazing feeling to do that."

North Carolina (14-7, 8-5 ACC). So much for the Tar Heels joining fellow bluebloods such as Duke on the bubble. They just ripped Louisville by 45 at home — granted, the Cardinals were coming off a COVID-19 pause — for arguably their best win of the season, and they have won three of their past four with the loss a competitive one to ninth-ranked Virginia.

Oklahoma State (14-6, 7-6 Big 12). The Cowboys remain eligible for the postseason while they appeal penalties handed down by the NCAA, and three wins in their last four with an upset of then-No. 6 Texas have helped their cause. Also helping is the fact that Cade Cunningham, one of the front-runners for the No. 1 pick in the NBA draft, would be must-see TV for an NCAA Tournament that is going to be all about the ratings given attendance restrictions due to the pandemic.

Seton Hall (13-9, 10-6 Big East). Kevin Willard's team had won four straight before a competitive loss to Georgetown slowed its momentum. Still, the Pirates are only 1 1/2 games back of Villanova for first place in the conference, and they have should be favored against Butler, UConn and St. John's as they finish the regular season.

Oregon (14-4, 9-3 Pac-12). At one point the Ducks had six of seven games postponed by COVID-19, and that streak ended with an ugly loss to Washington State. But they followed with five straight wins, including one over fellow bubble-dweller Colorado, heading into an important game against No. 17 Southern California on Monday night.

Xavier (11-4, 4-4 Big East). The Musketeers had just one win between Jan. 10 and Sunday night. Granted, they only played three games thanks to COVID-19 pauses. But losses in those other two games to UConn and St. John's hardly helped their cause, even though James Bouknight didn't play against the Huskies.

Minnesota (13-10, 6-10 Big Ten). Remember when the Golden Gophers capped a 9-1 start to the season with consecutive spankings of No. 4 Iowa and No. 17 Michigan State? Seems like a long time ago. Richard Pitino's bunch has lost six of its last eight and is coming off a 94-63 blowout at the hands of No. 5 Illinois.

Stanford (14-9, 10-7 Pac-12). The Cardinal have split their past eight games, but the four wins have come against teams in the lower half of the league in California, Utah and Washington. That makes their game against Oregon on Thursday night crucial for helping out a shaky resume.

Mississippi (12-9, 7-7 SEC). The Rebels had won four straight to climb onto the bubble, but a 66-56 loss to Mississippi State has them entering a final stretch against No. 20 Missouri, Vanderbilt and Kentucky needing at least a couple wins.