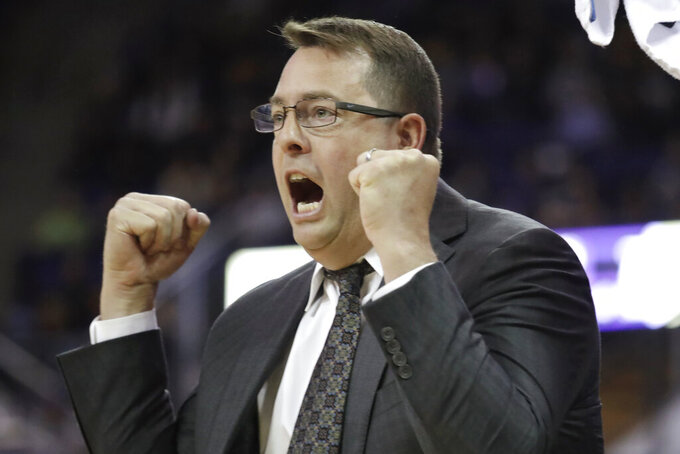 FILE - In this Feb. 20, 2020, file photo, Stanford coach Jerod Haase reacts to a score against Washington during the first half of an NCAA college basketball game in Seattle. Stanford made big strides on defense last season and now coach Jerod Haase is looking for the same on the offensive end with an experienced roster and highly touted freshman class. (AP Photo/Elaine Thompson, File)

STANFORD, Calif. (AP) — Stanford made significant strides on defense last season and now coach Jerod Haase is looking for the same on the offensive end with an experienced roster and highly touted freshman class.

That defense-first mentality is something he is counting on translating into success on offense.

“Last year was a major step forward because we could find an identity, and the identity was on the defensive end of the floor,” Haase said. “We had a great plan and executed it pretty well and the guys bought into it. On the offensive end, we're developing an identity because we do have some talented players and we're going to share the basketball and try to be an attack team. But we need to stop turning the ball over so much.”

Oscar da Silva will lead a young Cardinal team and take on the bulk of the scoring load.

Yet he should have some solid help: Stanford notched a top-10 recruiting class for the second time during fifth-year coach Haase’s tenure led by highly touted Ziaire Williams.

“I'm sure it will take some attention away from me, which I think is going to be helpful for me, too,” da Silva said.

“We're in a position right now, all the hard work, we're seeing progress being made," Haase said. “The whole time we've been here it's developing a program as opposed to a basketball team, and I think that's one of the neat things about Stanford.”

At 6-foot-8 and 185 pounds, forward Williams is a top-five recruit who will be called upon to make an immediate impact on the program as a freshman along with four others.

“They complement the losses that we had,” da Silva said.

Williams is one of three McDonald’s All-Americans to join the Pac-12 this season.

Stanford started 7-0 last season and won 11 of its first 12 but also endured a trio of three-game losing streaks, including to end the season with a loss to rival California in the first round of the Pac-12 tournament.

Another fast start would be great, yet Haase acknowledges how the conference is behind many others in the country who were able to practice together months ago.

“I don’t think there’s going to be a sense of panic if we happen to lose a game or things don’t go perfectly,” Haase said.

The Cardinal went 14-4 at home in Maples Pavilion but made too many mistakes with the ball — averaging 14.3 turnovers per game to hurt their cause on the offensive end. That is a major focus.

Long-range shooting will be a void with the departure of Terry and Isaac White's graduation.

“We have some really good and long athletes that are going to fill those gaps very nicely,” da Silva said. “We have some older experienced guys coming back who kind of know the scheme and know how to play on defense. That definitely gives us a boost of confidence on offense just knowing that you have a basis to rely on.”

Sophomore Spencer Jones will look to build on what he did as a freshman, when he averaged 8.8 points and 3.2 rebounds while ranking second with 2.6 made 3-pointers. He owned the Pac-12's third-best 3-point percentage at .431 and his 81 3s are second in program history by a freshman.

“The veterans are going to be a major part of the team and it's something we really haven't had a whole lot of since I've been here, is really the look of a veteran team,” Haase said. “And we're supplementing that with some talented freshmen. The goal here is to be able to get to become an old team and it's hard to do in college basketball right now. If we can get that and sustain it over time that's a real good path to be successful."

Stanford will play three games at the Maui Invitational to be held this year in Asheville, North Carolina, during Thanksgiving week and the Cardinal's added December game under the new Pac-12 schedule is a home date with Arizona on Dec. 19.

Haase said the entire nonconference schedule was scratched because no dates could be finalized since the Pac-12's timeline wasn't yet clear.