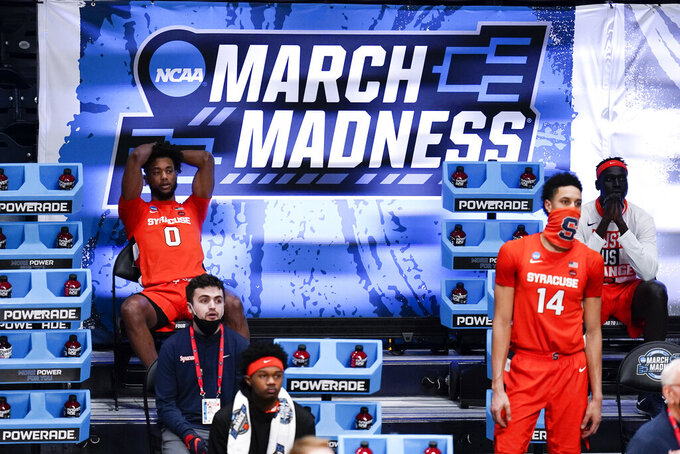 Syracuse forward Alan Griffin (0) and Jesse Edwards (14) watch from the bench against Houston in the second half of a Sweet 16 game in the NCAA men's college basketball tournament at Hinkle Fieldhouse in Indianapolis, Saturday, March 27, 2021. Houston won 62-46. (AP Photo/Michael Conroy)

Griffin made the announcement Friday in a video post on Instagram that featured his father, Adrian, who spent a decade in the NBA as a player and now is an assistant coach for the Toronto Raptors.

“You have all the tools and the talent to be an NBA player,” Adrian Griffin said in the video. “But talent alone doesn't get you there.”

Although he didn't elaborate, Alan Griffin is expected to hire an agent.

Griffin transferred to Syracuse after two seasons at Illinois. The 6-foot-5 junior was third in scoring this past season for the Orange at 13.3 points per game. He ranked second in rebounding at 5.8 and led the team with 46 blocks that included a game-saver in an overtime home win over Buffalo in December.

He was in the starting lineup for the Orange in all but one game. He converted 36.1% from beyond the arc, second on the team to Buddy Boeheim, and also led the Orange in free-throw shooting at 89.7%.

Griffin slumped late in the season at a critical time, going 1 of 13 from the field and scoring just eight points in the Orange's final four games, the last three of those in the NCAA Tournament as coach Jim Boeheim altered the lineup. Griffin averaged 29.3 minutes a game for the season but played only 51 minutes over that four-game span.

Boeheim lost another player later in the day when sophomore forward Quincy Guerrier announced on Twitter that he was placing his name in the NCAA transfer portal and entering the NBA draft. Guerrier, a Montreal native, averaged 13.7 points and 8.4 rebounds in a breakout season.