Washington State looks to build on best season in a decade 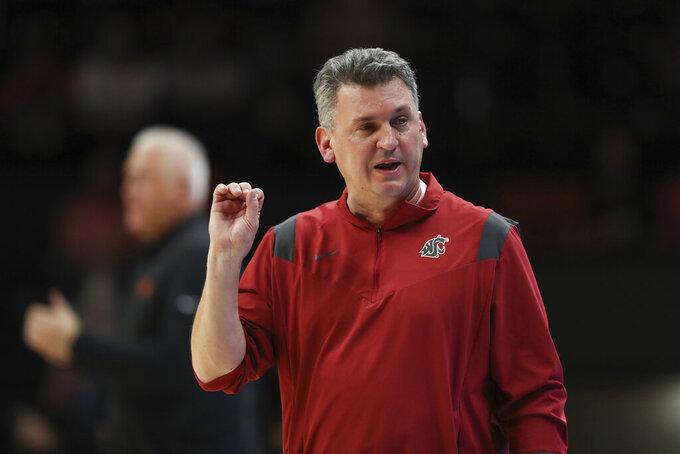 FILE - Washington State head coach Kyle Smith gestures during an NCAA college basketball game against Oregon State on Monday, Feb. 28, 2022, in Corvallis, Ore. The Washington State basketball team had its best season in a decade last year, but coach Kyle Smith lost most of that team to graduations and transfers. No problem, Smith has recruited another deep roster of talented players for his fourth campaign on the Palouse. (AP Photo/Amanda Loman, File)

PULLMAN, Wash. (AP) — Washington State had its best season in a decade last year, but coach Kyle Smith lost most of that team to graduations and transfers.

No problem, Smith has recruited another deep roster of talented players for his fourth campaign on the Palouse.

Last year, the Cougars finished 22-15 and reached the NIT semifinals, where they lost to Texas A&M. They were fifth in the Pac-12 at 11-9.

But the only returning starters are guard TJ Bamba and forward Mouhamed Gueye. Bamba averaged 7.7 points and 3.4 rebounds per game last season, while the 6-foot-11 Gueye averaged 7.4 points and 5.2 rebounds as a freshman and is poised for a breakout season. He was named to the Pac-12 all-freshman team.

With so much turnover, Smith brought in 10 newcomers, including Saint Mary's transfer Jabe Mullins and Tennessee transfer Justin Powell.

The Cougars got some bad medical news in recent weeks.

Myles Rice, who redshirted last season, announced recently he has been diagnosed with Hodgkin’s lymphoma and will be sidelined indefinitely as he battles the cancer.

Three days earlier, center Dishon Jackson announced he will be sidelined indefinitely as he works through an unspecified medical issue. It’s too early to tell if Jackson will return this season, Smith said.

“It’s going to change the way we play, for sure, because he was kind of the anchor in our low post,” Smith said. “He doesn’t want to make a big deal about himself. … We’re rooting for him to get back as soon as he can.”

With Jackson out, the Cougars will turn to newcomer Adrame Diongue and Gueye, who tested the NBA draft waters this year, Smith said.

“Mouhamed has a good feel,” Smith said. “He’ll be that sleek 4. We’ll downsize a little bit out of necessity and play him at center, utilize some of his versatility there.”

Diongue signed with WSU this offseason and is the Cougars’ No. 2-rated recruit of the past two decades, according to 247Sports.com.

“He came in with a lot of expectations, just off of his recruiting,” Smith said. “He’s slender, so it’s going to be tough, but he’s got a really good feel on both sides of the ball. Really good quickness."

Forward Mael Hamon-Crespin is a native of France with deep international playing experience and is expected to come off the bench.

Smith is in his fourth season, and has seen steady improvement in what had been a moribund Washington State program. He has a 52-44 record at WSU, including 25-33 in the Pac-12. Attendance at Beasley Coliseum was 3,100 last season.

The only seniors on this team are Ben Olesen and Rodman, who is the son of former NBA star Dennis Rodman.

Washington State has not been to the NCAA Tournament since making appearances under former coach Tony Bennett in 2007 and 2008. The Cougars have appeared in the tournament only six times in program history.

Washington State plays No. 5 Baylor in the Coast-to-Coast Challenge in Dallas on Dec. 18. They also have nonconference games against Boise State, UNLV and will play in the Diamond Head Classic in Hawaii over Christmas.