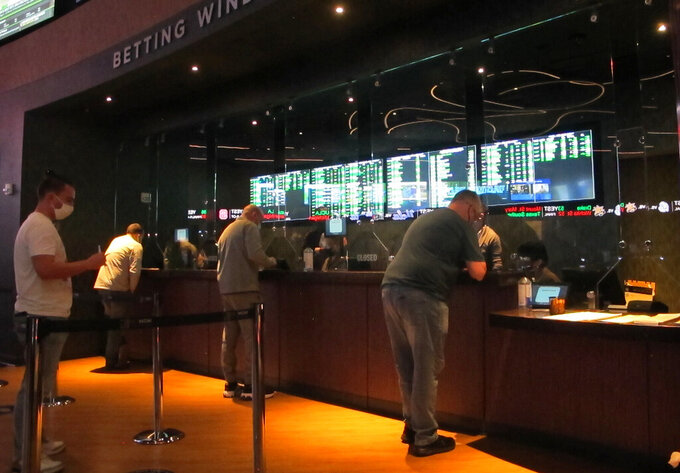 People line up to make sports bets at the Borgata casino in Atlantic City NJ on Friday March 19, 2021, the first full day of the NCAA March Madness tournament. Last year, it was March sadness as the NCAA college basketball tournament got canceled days before it was supposed to start, due to the coronavirus. (AP Photo/Wayne Parry)

ATLANTIC CITY, N.J. (AP) — Jonathan Price was all set: He got tickets to the Elite Eight round of the NCAA basketball tournament at Madison Square Garden, where he, his two brothers and his dad would revel in hours of college basketball bliss.

But that was last March, just before the coronavirus wiped out the March Madness tournament — and the boatloads of money that would have been bet on it. But this year, it's back.

On Friday, the 25-year-old from Staten Island, New York, was at the Borgata casino in Atlantic City, New Jersey, with a wad of cash and picks that he was too superstitious to reveal to a reporter. (He was wearing a North Carolina jersey, though.)

“We're owed a March,” said Price. “Last year got canceled, and it was pretty devastating. March Madness is something I look forward to all year.”

It's also something sportsbooks at casinos and racetracks, and particularly online operations, look forward to as well . Spread out over several weeks, the NCAA tournament is collectively the biggest sports betting event of the year. And though the amount that sportsbooks keep after paying out winning bets and other expenses is relatively small, the tournament is essential to their business, particularly in gaining customers they hope will stick with them throughout the year and bet on other sports.

“In terms of betting interest, this year should prove to be a bit of a perfect storm for online wagering and shatter previous records,” said Jay Croucher, head of trading at PointsBet USA. “In combining factors like pent up demand after last year’s cancellation, the growth of U.S. sports betting and how many more states are now online versus two years ago, it should come as no surprise that U.S. sportsbook operators are expecting huge numbers.”

Because many offices remain closed because of the pandemic, eliminating many office pools, fewer Americans expect to fill out brackets for the tournament this year. But the overall number of people making bets on March Madness should remain about the same as the last time the tournament was held, in 2019, according to the American Gaming Association, the gambling industry’s national trade association.

Kevin Hennessy, a spokesperson for FanDuel, said legal sports betting “continues to surpass our expectations.” His company paid out more than $17 million to customers on a March Madness betting promotion Thursday night.

“We’re gearing up for the greatest amount of engagement we’ve seen on the tournament thus far,” added Johnny Avello, who's in charge of the race and sports books at DraftKings.

Melonie Johnson, the Borgata's president, said it was exciting to see crowds return to the casino for the tournament.

“The human race was meant to be entertained, not bored,” she said. “Coronavirus has taken a real toll on everyone. But now there's hope; we can see it.”

Tom Gable the casino's director of sports and racing betting, said he expects the level of bets on the first day of this year's tournament to exceed that of 2019, the last year it was held.

“We went from preparing for the biggest event of the year in terms of sports betting, to preparing to shut down, all within the span of a few days,” he said.

Price was to meet with a group of friends on Saturday to watch more basketball in between a round of golf. His betting budget for the weekend was between $2,000 and $3,000.

“We're going to get drunk, watch the games and chill out with the boys,” he said. “Doesn't get much better than that, does it?”