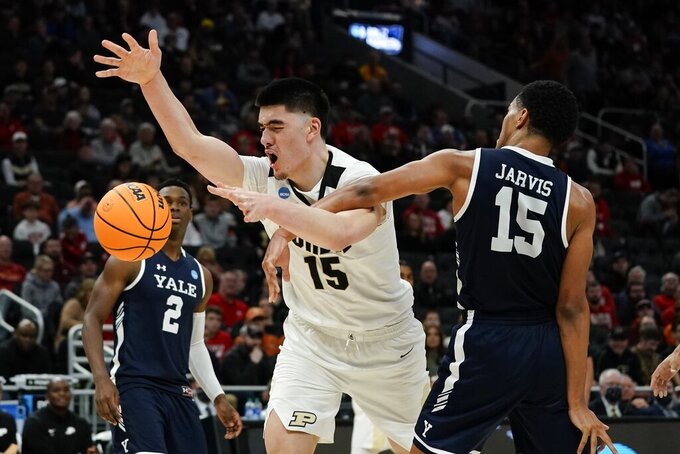 Purdue's Zach Edey is fouled by Yale's EJ Jarvis during the second half of a first round NCAA college basketball tournament game Friday, March 18, 2022, in Milwaukee. (AP Photo/Morry Gash)

MILWAUKEE (AP) — Jaden Ivey dashed up the court, and Zach Edey towered over the lane.

Purdue's speed and size were just too much for Yale.

Ivey raced his way to 22 points and Edey controlled the action inside, helping the Boilermakers shut down the Bulldogs for a 78-56 victory in the first round of the NCAA Tournament on Friday.

Ivey, one of the fastest players in college basketball, went 3 for 6 from 3-point range and 7 for 9 at the free-throw line in 27 minutes. The 7-foot-4 Edey made the most of his size advantage against the Ivy League champions, finishing with 16 points and nine rebounds in 19 minutes.

“On the rebounds, I felt like I could just kind of get it over them,” Edey said.

No kidding. Yale coach James Jones inserted 6-8 EJ Jarvis into his starting lineup, looking for a bigger body to help with Purdue’s size. But it had little effect.

“Have you seen anybody in your life as big as (Edey) is?” Jones said. “Other than Yao Ming, I've seen nobody as big as he is. He is the second-largest man I've ever seen.”

Led by Ivey and Edey, No. 3 seed Purdue (28-7) won its NCAA opener for the fourth time in its last five tournaments. The lone exception occurred last year, when Purdue was upset by 13th-seeded North Texas in the first round.

The overtime loss to the Mean Green seemed like a distant memory as the Boilermakers pulled away from the 14th-seededn Bulldogs at the beginning of the second half. Next up is sixth-seeded Texas — an 81-73 winner against Virginia Tech — in the second round of the East Region on Sunday.

“We all felt the feeling of losing last year, first round, so I felt like all of our guys were motivated,” Ivey said, “and so was I.”

It was the first NCAA Tournament game for the Bulldogs since 2019. They won the Ivy's regular-season title in 2020, but the postseason was canceled because of the pandemic. They didn't play at all last season because the league canceled all sports due to COVID-19.

“We were an undersized team playing against one of the biggest teams in the country,” Yale guard Jalen Gabbidon said. “I thought we played tough, and it didn't go our way.”

Led by Swain, who made each of his first five shots, Yale led 16-15 with 13:06 left in the first half. That's when Ivey and the Boilermakers started to take over.

Ivey made two foul shots and a 3-pointer during a 10-0 spurt that put Purdue ahead to stay. Gabbidon's driving layup got Yale within nine early in the second half, but the Boilermakers responded with a 17-2 run.

Sasha Stefanovic held his arms out in delight after his second straight 3-pointer rolled in for a 59-39 lead with 15:46 remaining. Mason Gillis scored and Caleb Furst connected on two foul shots to increase the advantage to 24 with 11:27 to go.

“They made some plays to start the second half,” Purdue coach Matt Painter said. “We were able to answer and then be able to push it out. I thought that was the key to the game right there.”

Furst finished with 10 points for Purdue, which improved to 25-0 this year when it scores at least 70 points.

Yale: The size disparity hurt the Bulldogs in a variety of ways. They were outrebounded 42-33 and outscored 26-12 in the paint. They also shot just 8 for 32 from the field in the second half.

Purdue: The physical advantage for the Boilermakers also showed at the line, where they went 27 for 33, compared with 6 for 11 for the Bulldogs. Painter got a chance to rest several key players in the final minutes, which could help in the next round.

Purdue is one of five teams nationally whose only losses this year were to NCAA Tournament teams, joining Gonzaga, Kentucky, Tennessee and Villanova.