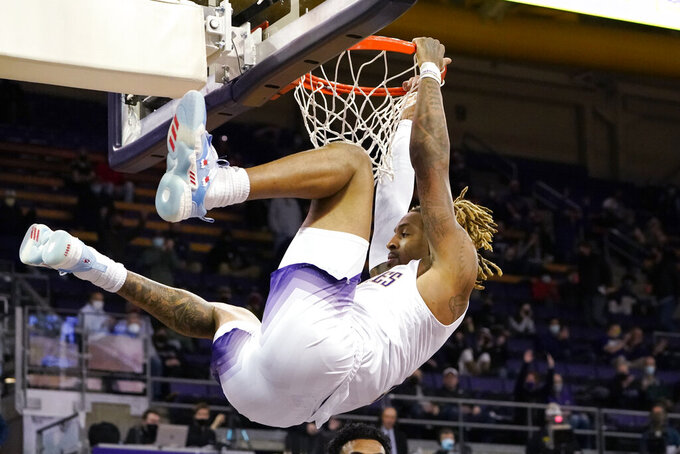 Washington's Nate Roberts hangs from the basket after dunking against California in the first half of an NCAA college basketball game Wednesday, Jan. 12, 2022, in Seattle. (AP Photo/Elaine Thompson)

SEATTLE (AP) — Terrell Brown Jr. overcame a quiet start scoring 18 of his 21 points in the second half, and Washington rallied from a nine-point deficit to beat California 64-55 on Wednesday night.

Brown, the leading scorer in the Pac-12 at 21.4 points per game, had an electric stretch of the second half where he scored 12 of 15 points for the Huskies. P.J. Fuller added five key points and the Huskies won for the second time in three games.

“I was just overthinking it too much,” Brown said of the slow start. “Now that I’m scoring the amount of points (I am), teams are trying to do different things, schemes and stuff like that in a way slow me down. But I know I have my teammates, they have my back.”

“That’s what was hurting us at the beginning of the year. Some of the good big guys that we played gave us problems,” Hopkins said.

Jordan Shepherd led California with 12 points and was the only Golden Bears’ player in double figures. Kelly picked up two fouls in the first half and was never able to get into the offensive flow. Kelly, who averaged 15.0 per game, finished with four points and failed to reach double figures for the first time in the past eight games.

California (9-8, 2-4) shot 50% from the field, but tied a season-high with 17 turnovers and failed to get to the foul line. The Bears attempted just five free throws and made three.

“The second half we didn’t play well," California coach Mark Fox said. "Our defense wasn’t as good. We turned the ball over another eight times in the second half. And we couldn’t score.”

California closed the first half on a 21-6 run to take a seven-point lead and extended the lead to nine in the opening stages of the second half.

Washington chipped away at the advantage and led 52-51 when it finally found separation. California’s Kuany Kuany was called for a flagrant foul swinging his elbow and catching Fuller in the face. Fuller hit both free throws and on the ensuing possession Brown hit a step-back jumper after a crossover that made Kuany slip to the floor.

“His feet kind of just left him and I’m watching the ball go up in the air and I see it rolling around and I’m like, ‘that’s going in.’ It went in and the building just erupted,” said Washington guard Daejon Davis, who finished with eight points, seven assists and six steals.

Fuller added a 3-pointer the next time down and Roberts capped the decisive run with a baseline dunk and a 62-51 lead with 3:37 left.

California: The Bears were outscored 16-3 at the free-throw line and didn’t shoot their first free throw until 10:45 were left in the game. It was the fourth time in the past three seasons the Bears attempted five free throws or less.

California: At Washington State on Saturday.