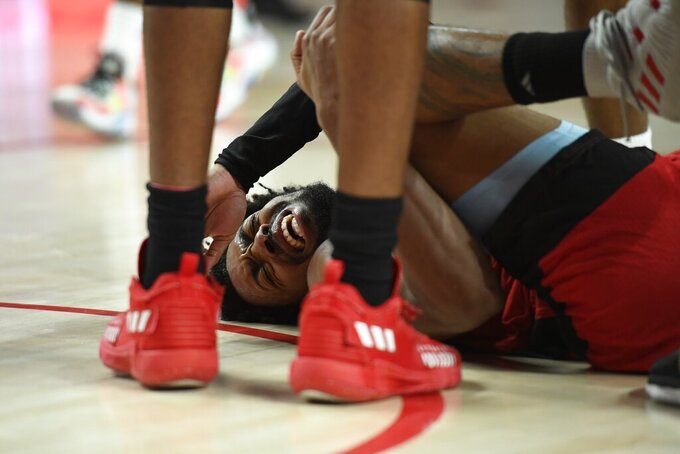 Louisiana Lafayette forward Jordan Brown holds his leg after falling to the ground during the first half of an NCAA college basketball game against Houston Tuesday, Dec. 14, 2021, in Houston. (AP Photo/Justin Rex)

Taze Moore had 14 points and 10 rebounds, Fabian White Jr. finished with 12 points and nine rebounds and Kyler Edwards had 12 points and seven rebounds for the Cougars (9-2). Houston shot 39% and struggled on 3-pointers, making just two of 21 attempts.

“It was a good win,” Houston coach Kelvin Sampson said. “Matter of fact, it might be the best win we have had all year considering the circumstances.”

Sampson said his team was fatigued after the last three days and getting back late following its one-point loss at Alabama on Saturday. Houston played only seven players against Louisiana, and were without leading scorer Marcus Sasser, starting forward Reggie Chaney and reserve guard Tramon Mark due to injuries.

“Before the game started, I said I wanted us to play as hard as we can for as long as we can,” Sampson said. “Without substitutes, we weren’t going to be able to do it for 40 minutes, but when they started to come back a little bit, I think our culture kicked in.”

Houston never trailed in its 32nd straight home win, which the Cougars earned by outrebounding Louisiana 48-37, including 21 offensive rebounds, and dominating the paint 46-18.

“Some nights you just have to battle through it,” Sampson said. “What we do is not a beauty contest. At the end of the year, you look back and what’s your record? Right now, we’re 9-2. We’re three points away from being 11-0.”

“Second half we battled, got back in the game,” Louisiana coach Bob Marlin said. “Got it to seven, had two possessions in a row that we had clean looks at 3’s that we missed that would have cut it to four and could have possibly had a really good finish on our hands.

“We weren’t good enough tonight. They beat us to loose balls; they beat us on the glass bad. They deserved to win the basketball game.”

Houston held a 57-42 lead following a dunk by Carlton, but Louisiana responded with an 8-0 run to cut the lead to seven on a 3-pointer by Garnett with eight minutes remaining.

Louisiana: The Ragin’ Cajuns fell to 10-44 against ranked opponents. … Louisiana was able to get back into the game with stingy defense, limiting the Cougars to 29% shooting in the second half, but couldn’t finish the comeback, going 1 for 13 from the field down the stretch.

Marlin said the tough non-conference game against Houston should help his team with the Sun Belt Conference about to start.

“It was an opportunity to improve,” Marlin said. “We won’t play a better rebounding team than this one all year.”

Houston: The Cougars have not lost consecutive regular-season games since three straight in January 2017. Houston has won 23 straight games after a loss over that span. … Houston forced Louisiana into 19 turnovers, which the Cougars turned into 22 points.

Houston: Plays Oklahoma State in the College Basketball Showcase in Fort Worth on Saturday.