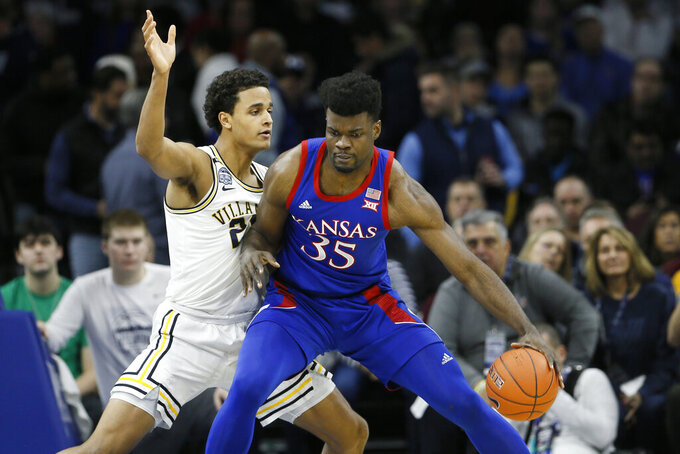 The holidays gave teams a chance to recover, recharge and reset from the first two months of the season.

As the calendar flips to 2020, conference play begins for some leagues, heats up for those that already started.

The road to March is about to heat up.

The Jayhawks (10-2) won the Maui Invitational, knocked off a ranked Colorado team and stomped Stanford on Sunday. Kansas has one of the most formidable front courts in the country with Udoka Azubuike and David McComack, and talented guards to play with them.

The Moutaineers (11-1) are back to playing don't-give-an-inch defense under Bob Huggins after missing the NCAA Tournament last season. West Virginia won the Cancun Challenge by knocking off No. 24 Wichita State and pushed around No. 5 Ohio State in a 67-59 win on Sunday after laboring in a win against Youngstown State.

“I think it's that old adage of respect all and fear none,” Huggins said after the Ohio State victory. “We came off not respecting Youngstown and they gave us a heck of a game. Hopefully our guys learned from that. We're not afraid to play people, obviously, or why would we do this?

RIVALY RENEWED: No. 12 Michigan (10-3, 1-1 Big Ten) has fallen back since matching a record by debuting at No. 4 in the AP Top 25 on Dec. 2. The Wolverines lost to Louisville after its monumental poll climb and followed with losses to Illinois and No. 4 Oregon.

The 14th-ranked Spartans (10-3, 2-0) are still trying figure things out since star guard Cassius Winston's brother was hit by a train and killed in early November. They may also be without the All-American senior against the Wolverines.

Winston suffered a bone bruise in his left knee during practice last week and did not play in Michigan State's win over Western Michigan Sunday night.

ACC SHOWDOWN: The ACC is always tough and Saturday will be no different for No. 7 Louisville and No. 18 Florida State.

The Cardinals (11-2, 2-0 ACC) are smarting after losing to rival Kentucky on Saturday, but held Michigan to 43 points earlier in December, They also have one of the nation's best players in Jordan Nwora, who averages 20.2 points and 7.2 rebounds.

The Seminoles (11-2, 1-1) made a Sweet 16 run last season after being overlooked and have the type of experienced team that could prove projections wrong again this year.

NITTANY LIONS AND HAWKEYES: The Big Ten will have a matchup of ranked teams on Saturday, when No. 21 Penn State faces No. 23 Iowa at The Palestra in Philadelphia.

The Nittany Lions (11-2) were blown out by Ohio State, but bounced back by beating then-No. 4 Maryland.

Both teams have dynamic scorers. Penn State's Lamar Stevens averages 16.4 points and 7.2 rebounds after testing the NBA waters during the offseason. Iowa forward Luke Garza leads the league in scoring at 21.5 points per game and averages 10.0 rebounds.

This one should be fun to watch.

Oregon climbed to No. 4 this week to match it highest ranking, with the 2017 Final Four team. The Ducks have a difficult start to the Pac-12 season, playing at Colorado and Utah.

The Buffaloes were picked right behind Oregon in the Pac-12 preseason poll and were ranked earlier this season. Utah has been up and down, but one of the ups was a victory over No. 17 Kentucky in Las Vegas.

No. 25 Arizona (10-3) has dropped off some since a strong start to the season, losing at No. 18 Baylor, at home to top-ranked Gonzaga and to St. John's in San Francisco.

The Wildcats open Pac-12 with a rivalry game, facing Arizona State on Saturday. The Sun Devils have been inconsistent and were run out of the gym in a loss to Saint Mary's, but have talent and will certainly be up for playing their biggest rival.

No. 13 San Diego State is one of two remaining undefeated Division I teams — with No. 8 Auburn — but will face a big challenge Saturday, playing at Utah State. The Aggies were ranked earlier this season and have one of the nation's top guards in Sam Merrill.