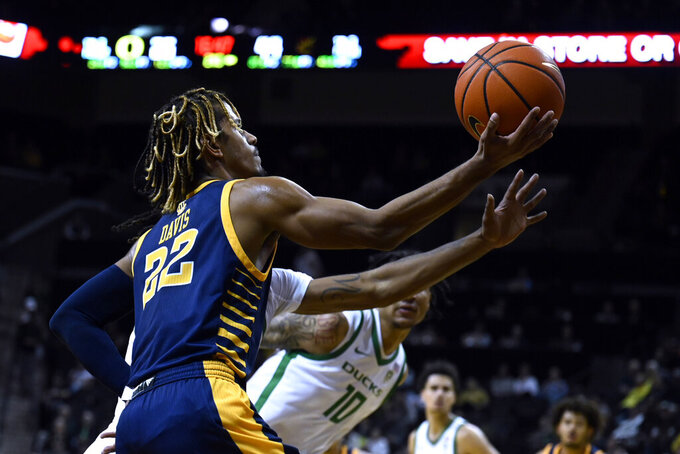 Dawson Baker added 11 points for UC Irvine (2-0), which is picked to finish fourth in the Big West Conference this season. The Anteaters made 12-of-28 3-pointers.

“Credit the guys in our locker room, they believed they could come in and compete and it is hard to generate that all the time, but we have a winning tradition,” UC Irvine coach Russell Turner said. “They had some guys out and it is not easy to play us early in the year, I know that. Give them credit for taking this game, it was a big deal for us to get an opportunity to come in here and play. This was a hell of an opportunity for us to play a team of their quality. We don’t take this for granted.”

“We got beat in every facet of the game,” Oregon coach Dana Altman said. “Hustle, toughness, a number of our practices resembled that and I was fearful that at some point in time that might come. They were the aggressor from the start.”

It was UC Irvine’s first win over a ranked opponent since beating No. 18 Kansas State 70-64 in the 2019 NCAA Tournament. The last time the Anteaters beat a ranked team in the regular season was over No. 20 Stanford in 2003.

“It is meaningful, unquestionably, to beat a program of this quality and players of this quality in an arena where they have such an unbelievable record in nonconference play,” Turner said. “It is special for us and I am grateful.”

Oregon played without transfer guards Brennan Rigsby and Jermaine Couisnard, who are out indefinitely due to injury. It matched the largest margin of defeat in a nonconference home game for the Ducks since a 67-54 loss to Virginia on Dec. 18, 2011.

“A poor mental effort,” Altman said. “We didn’t compete. I wish I had something positive to say, but really disappointed. The guys are disappointed. I’m disappointed. Got punched right from the start.”

UC Irvine built a 35-22 lead at halftime and stretched the margin when Bent Leuchten scored to open the second half and Devin Tillis added a three-point play to push the lead to 40-22.

Dante made a free throw to cut the lead to 42-26 with 18:03 left to play, but the Ducks couldn’t get much closer the rest of the game.

UC Irvine: The Anteaters improved to 2-0 with a couple West Coast Conference teams ahead in Loyola Marymount and Pepperdine before hosting Life Pacific. There is not likely another ranked opponent on UC Irvine’s schedule this year.

Oregon: The Ducks opened the season with a win over Florida A&M and looked likely to start 3-0 with wins expected over UC Irvine and Montana State before the schedule gets tougher. Oregon’s nonconference schedule is loaded in the middle with a home game against third-ranked Houston on Sunday followed by a trip to the Phil Knight Invitational where they could face No. 1 North Carolina, No. 16 Villanova, or No. 20 Alabama. After that, Oregon opens Pac-12 play against Washington State and No. 8 UCLA before wrapping up nonconference games against four non-power conference programs.